Twitter issued an apology for blocking the petition website “IStandWithPhil.com[1]” over the weekend, saying it was flagged as spam:[2] 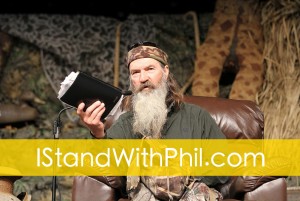 The social network has issued a formal apology for blocking the site iStandwithPhil.com saying it was flagged as spam, which prohibited Twitter users from linking to the page.

Twitter users are now able to freely link to the site without any problems.

‘The URL IStandWithPhil.com was mistakenly flagged as spam tonight, by an outside organization that tracks spam sources,’ says the apology issued Monday to MarketingLand. ‘We have restored access and apologize for the error.’

Prior to lifting the block, users trying to link to the site were told their tweet linked ‘to a page that has spammy or unsafe content.’

The website, run by the organization Faith Driven Consumer, is petitioning A&E to reinstate Robertson and formally apologize to his family and his fans for removing him from future filming. It has collected more than 202,868 signatures since Friday, storming past its goal of 200,000.

Which is more likely: Twitter intentionally blocks the site, or a bunch of activists on Twitter work to get the site blocked?

I think the latter. : What about you?