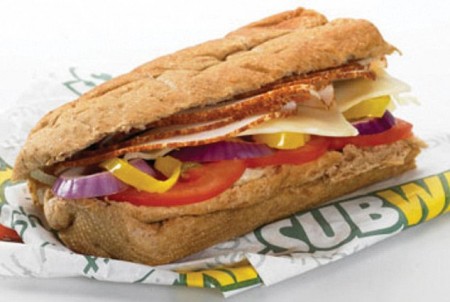 Almost 200 branches of Subway have cut ham and bacon from their menus, serving halal meat in response to calls from their Muslim customers.

The sandwich chain said ‘following a strong demand from our Muslim customers’, 185 outlets in the UK and Ireland have introduced the meat, which is prepared under strict Islamic rules.

In Arabic the word halal means ‘permitted’ or ‘lawful’ and defines anything that is allowed or lawful according to the Qur’an.

It is often used to indicate food — particularly meat — has been prepared in accordance with Muslim principles and techniques.

Muslims are forbidden from eating any non-halal food and meat from pigs and Subway said customers can identify those stores selling halal food by the special ‘All meats are Halal’ sign, which must be displayed in participating branches.

In the halal-only branches ham and bacon has been substituted for turkey ham and rashers.

Many animal charities condemn halal slaughter as being cruel to animals.

Traditionally in halal abattoirs the throats of the animals are cut while they are fully conscious — an act many campaigners say is inhumane and needlessly cruel.

If Subway is doing this only in Muslim communities, I don’t know that this is really that big a deal. : They are just catering to their client base.

It’s when they have to do it across the board it’s a problem.