Hard to see where his logic is flawed[1]: 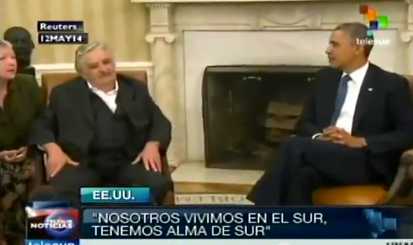 “You will have to become a bilingual country … because the strength of Latin women is admirable and they will fill this country with people who speak Spanish and Portuguese,” Mujica told Obama during a brief public exchange prior to their meeting.

Mujica’s remark is partly true – the Latino population will rapidly rise during the next few decades. For example, more Latinos babies than white babies are being born in California and Texas.

Progressives are working to help that demographic trend, because most Latinos vote Democratic. For example, progressives have united behind the Senate’s 2013 immigration bill, which would bump up immigration to 33 million people over the next decade.

The Latino population is now just over 50 million, including several million illegal immigrants.

However, the Latino birthrate has dropped even faster than the white birthrate since the real estate crash of 2007.

Obama did not respond to Mujica’s claim.

He was most likely in shock.

Not at the claim, but at the fact a politician was telling the truth. He’s not used to seeing that.