Victim Orders Man to Sit on Street Corner with Sign Reading “I Beat Women. Honk If I’m a Scumbag” (Video)

Bold move by the victim:

A woman in Florida said she gave the man who attacked her last weekend the choice of getting arrested or sitting on the street for eight hours with the ensemble.

“He’s doing it because he doesn’t want to go to jail,” Alisha Hessler, 20, told ABC affiliate WFTS-TV in Tampa. 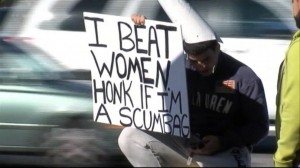 Hessler said she met the man last weekend when her two male friends brought him along for a night out clubbing, WFTS-TV reported.

On the way home, she said he tried to reach up her skirt, but she said “no” and tried to push him away, Tampa Police Department Lt. Ronald McMullen told ABCNews.com.

The man allegedly wouldn’t stop until she slapped him, McMullen said.

“That’s when he started beating me repeatedly until I had a broken nose and a concussion,” Hessler told WFTS.

Good thing or bad thing? What do you think?