Go ahead, John. Tell these folks[1] how much you want to pass amnesty: 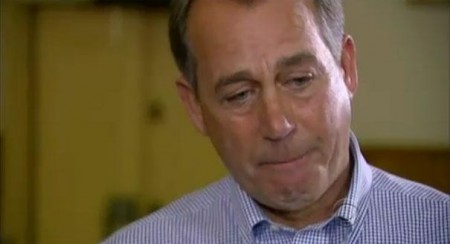 Several family members of victims of horrific crimes committed by illegal aliens have invited House Speaker John Boehner to visit the U.S. Border with Mexico with them in a fiery letter provided exclusively to Breitbart News.

“As you leave Washington, D.C. to vacation with your families, our families invite you and your entire family to spend the weekend in McAllen, Texas,” the victims’ family members wrote to Boehner and other lawmakers Wednesday. “We invite you to see firsthand the invasion and lawlessness that is destroying our beloved country, and how you (and others) have given de facto permission and unfettered access to the perpetrators who have killed our loved ones, leaving our families in complete grief and disbelief as to ‘how’ this horrific tragedy was allowed! What about our children, Mr. Boehner? Where is the out-cry for OUR children and American families?”

In the Speaker’s lobby just off the House floor, members of Congress were full of recriminations over how the border bill had just died–until it sprang back to life.

Earlier in the day, Speaker John Boehner had decided to pull the package and send lawmakers home without voting on anything related to the border. The decision was so final that multiple lawmakers, including the chairman of the House Appropriations Committee, Hal Rogers, were already at the airport getting ready to board flights home.

But a sudden and fierce backlash forced Boehner to rescind the decision and hold the nearly two-hour emergency meeting that prompted the decision to delay recess. In particular, members said that they could not abide leaving without at least trying to vote on the bill, which, if nothing else, would show where each member stood on the matter.

In the meeting, most Republicans expressed support for figuring out some way — any way — to pass a bill that is widely expected to go nowhere but was hoped to give the GOP a political advantage over the recess.

Go to the border. Visit the “children.”

Take pictures and get angry.

That is, if you’re not too busy attending fundraisers, like someone we all know.

The 15 Best Conservative News Sites On The Internet[5]

Obama Voters Say You Have to Pay Their Way[6]