Voter affiliation not polling point to a Romney victory in November 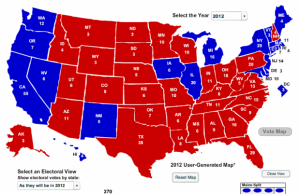 [1]All the polls show that the election of 2012 is very close. Most polls show Barack Obama and Mitt Romney tied. Others show slight leads within the margin of error for Barack Obama. Yet still others show a slight lead within the margin of error for Mitt Romney. One thing is for sure. This is the most important election in the history of the United States.

It seems that for the past ten years or so every election we have is a little more important then the last. Every election we hear the same thing. This election is the most important election in our lifetime. The truth is this election is the most important election of our lifetimes. The outcome may fundamentally change who we are as a people. It is often said that elections have consequences. This is an understatement. The results of 2008 have made a huge impact on all of our lives. We are a poorer and more destitute nation and have become much less relevant and competitive on the world stage.

There is no doubt that 2008 was a consequential election. It was also a monumental election and for many monumental reasons. For the first time in our nation’s history we elected a black president. America broke through the color barrier and showed that racism no longer lives in the majority of our hearts. But what the 2008 election could be remembered for is much darker and more sinister. The 2008 election could go down in history as the election that started the beginning of the end for America.

I believe the election of 2012 will finally put an end to the dark days of Barack Obama’s ineptitude and will open up a new chapter in America filled with promise and prosperity. 2012 will mark the beginning of a renewal, rebirth, and revitalization of a proud and great nation.

As I mentioned previously, polls are close and seem to go up and down almost daily. Polls are nothing more than a temperature gage or thermometer of a small portion of people. They are a tiny snapshot into the minds of some voters.

However, the true story lies in the undeniable details of a different kind of snapshot. A snapshot that really counts. That is voter affiliation by political party in each of the so called swing states.

There are about 13 so called swing states in this election. They are as follows: Florida, Ohio, Virginia, Pennsylvania, New Hampshire, North Carolina, Iowa, Missouri, Wisconsin, Nevada, New Mexico, Colorado and Michigan. All of these states are very important, however for the sake of time and length of this article I am only going to compare the first three.

Florida, Ohio, and Virginia all voted for Barack Obama in 2008. The official results according to final election statistics were 50 to 48 in Florida, 51 to 47 in Ohio, and 52 to 46 in Virginia. These three vital and important states were all very close; including two of the states Florida and Ohio being won within the margin of error.

The party affiliation breakdown for all three states in 2008 and now in 2012 are as follows:

In 2008 Florida Democrats out numbered Republicans by roughly 700,000; 4.8 million to 4.1 million. The undeclared/unaffiliated and independent voters measured 2.5 million. As of June 2012 Republicans are still sitting at 4.1 million, however Democrats now register 4.5 million, and Independents now are up to 2.7 million. So what happened was Republicans stayed the same, Democrats lost 300,000, and Independents gained 200,000. That is half a million voters in a swing state that have changed their party affiliation.

In Ohio, voters are not required to give a party affiliation when they register to vote. Moreover, Ohio has a more open primary process and doesn’t keep very good records of voter affiliation. It is for this reason that unaffiliated/undeclared or independent voters get lumped into one huge group. This group is much larger than all the registered Democrats and Republicans combined.

In 2008 according to Ohio Secretary of State Jon Husted’s website, Democrats out numbered Republicans by 174,000, 1.48 million to 1.30 million. The unaffiliated voters totaled 5.1 million.

Let’s break this down even further.

Republicans lost 214,000 fewer voters than Democrats and unaffiliated voters grew by a whopping 1.2 million more voters. This obviously gives Republicans the advantage in two distinct ways. First, their are now 67,000 more registered Republicans than their are Democrats. Second, more voters decided to leave the Democrat Party in favor of being unaffiliated/undeclared or Independent.

Finally, let’s look at Virginia. Like Ohio, Virginia does not register voters by party affiliation either. In 2008 Virginia voted Democrat for the first time since 1964. This normally reliable red state has been showing some trends of turning purple. In the run up to the 2008 election Virginia saw a large increase in new voter registration. There were a total of 436,000 new voters registered in the state. Barack Obama won the state 52 to 46 and probably by about 100-150,000 votes. Virginia has very limited availability on statistics so I am resorting to using some voter affiliation polling rather than actual registrations.

However, like Florida and Ohio affiliation trends in Virginia also favor Republicans. To help illustrate these trends, I will refer to Gallup polling from 2010, 2011, and 2012.

The other 10 swing states show similar trends as well.

More voters have left the Democrat Party and have become Independents. This is an advantage to Republicans because history has shown that Independent voters typically decide elections. In addition, the truly undecided voter in this country is a relatively small number. Most experts say it is between only 6-8 percent of the entire electorate. History has also shown that these voters eventually vote for the challenger 70-75 percent of the time. This is also a good sign for Mitt Romney.

Another important factor that could play a major role in deciding the election is enthusiasm. According to a recent Rasmussen poll, Republicans are more enthusiastic about voting this election than their Democratic counterparts by a healthy 12% margin. Couple that with Obama consistently being under 50% job approval and you have the makings of a significant victory for Mitt Romney.

The Republican Convention is next week and when it is over Mitt Romney should be ahead by 4 to 7 points. The following week is the Democratic Convention and my guess is we will be back to where we were before the conventions.

The Presidential Election of 2012 should finally start to change permanently in favor of Mitt Romney shortly after the debates. This is where the Romney/Ryan ticket will finally separate itself from the Obama/Biden ticket. Most undecided or Independent voters will start to pay attention more closely and form their opinions more definitively during this time. After the debates, you will start to see a lead for Mitt Romney that should eclipse the margin of error. I predict that he will be up by 5 to 10 points nationally as well as in most of the swing states. As long as their are no “October Surprises” or an Israeli-Iranian war, this election should be won by Mitt Romney. All the data, trends, and history point to a Mitt Romney victory.

Additionally, The University of Colorado study on presidential outcomes has also predicted a Romney victory. The electoral projection for Romney is 320 electoral votes. The electoral map attached to this article is based on their projections. This is significant as this study has correctly predicted the winner of every single presidential election since 1980. As Republicans we must not be over confident though and remain vigilant. We must make sure that we all get to the polls no matter what and make sure we educate are friends and family on the importance of a Republican victory.

This election is more important than any other election that has come before it for one simple reason. It is a choice between two very different Americas. It is an election that will shape all of our lives and all of our children’s lives for generations to come. Elections in the past were about politics and policy and moderation and mediation. This election is very different. This election is about socialism, statism, and survival. It is no longer about right verses left. It is now about freedom versus tyranny, sovereignty versus submission, and individual liberties versus utopian collectivism. This election will determine whether or not we become a cradle to the grave society or remain an individual rights based limited government society.

The choice could not be any clearer.

I believe America will reject socialism and embrace capitalism. We will no longer wallow in unmitigated doubt, insurmountable debt, and disheartening despair. We understand the many challenges that our nation faces and we know that under the right leadership and tutelage we can solve them. The stakes are too high in this election for Americans to ignore. The country knows that they are not better off then they were four years ago and they can feel in their hearts that something is not right. A majority of Americans gave Barack Obama the benefit of the doubt in 2008. They won’t make the same mistake in 2012.