And are trying to restore some sense of normalcy[1]:

BLACKSBURG, Va. (AP) – Still grieving and increasingly wary of the media spotlight, Virginia Tech students returned to their beleaguered campus Sunday, preparing to salvage the final weeks of a semester eclipsed by violence.

The scene on campus resembled move-in day in late summer, with parents helping their children carry suitcases into dormitories. There were tears and hugs goodbye. But instead of excitement for the year ahead, there was simply determination to endure and regroup in the fall.

When classes resume Monday, the university will give students three choices: They can continue their studies through the end of the semester next week, take a grade based on what they have done so far, or withdraw from a course without penalty.

“I want to go back. It’s just really strange to just stop going,” said Paul Deyerle, a sophomore from Roanoke who was helping a friend move belongings from the dormitory where another close friend, Ryan Clark, was among those killed in the worst shooting massacre in modern U.S. history.

A number of students living in West Ambler Johnston Hall have asked to be relocated elsewhere.

“I need to keep going back,” Deyerle said, struggling for words. “It seems like every other facet of my life is different now, so I have to.”

To make the return to classes a little less difficult, their student government asked that the media leave their campus by this morning[2]:

And now, the student government at Virginia Tech is asking for all of that to end. It’s calling on hundreds of reporters to leave campus by Monday morning, when students are supposed to return toclasses.

A spokeswoman for the student government says the campus appreciates the reporting on the story, but that students are ready to move forward.

Liz Hart says “The best way to know how to do that is get the campus back to normal.”

She says students need to be able to get back to class and back into a “normal routine as much as possible” without any reminders of what a “difficult road” it will be.

Can’t say that I blame ’em. I know at least two of the big news nets did ‘specials’ on them this weekend (Fox and CNN) and I wouldn’t be surprised to find out the others did their own ‘specials’ on the tragedy. I think at this point, though, the mediots should honor the request of the SGA and let returning students return to class knowing they won’t be hassled by the media on their way. If they want interviews, they should request them off campus. Let these students try to get on with their lives without the constant hounding of a reporter nipping at their heels while they’re on their way to their next class, or jogging on campus, or just taking a break. It’s kind of hard to move forward when certain folks in the press won’t let you. 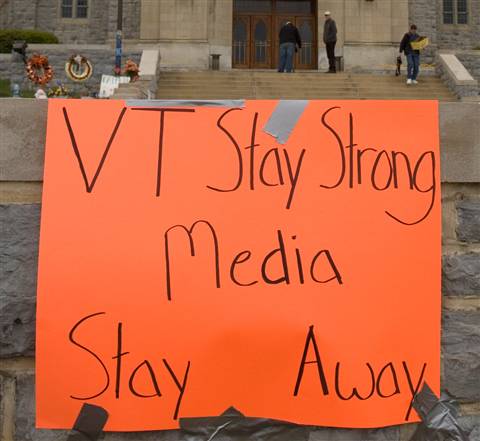