WARNING: Obama to Kill Free Press and Place Government Monitors in Every Newsroom

You know what would be really scary? I was reading about the KGB, translated as the Committee for State Security. I read how they “actively sought to combat “ideological subversion”. Well, it would really be scary if we had an agency in the U.S. who thought it was their job to control the ideals and ideas of the nation, I mean REALLY SCARY! After the whole NSA is spying on Americans story broke I maybe became pessimistic about government but not scared of government. Well, now I’m scared… the FCC is now going to be monitoring news which is a First Amendment violation.[1] 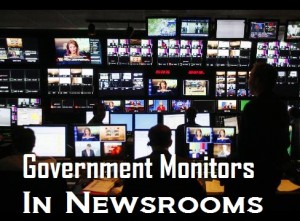 The FCC is launching a new study, taking upon itself the task of deciding what news the public “needs” to hear, versus the news the public wants to hear. The agency will conduct a “General Population Survey” that will “measure community members’ actual and perceived critical information needs.”

Next, the FCC will send monitors to newsrooms across the country who will ask questions regarding the “philosophy” of the newsroom, inquire about possible conflicts between reporters and their bosses, and even determine how much influence each individual has in deciding what to report.

Does that kind of government inquiry sound familiar? Are we not less than a year removed from an IRS apology for inquiring about the internal workings of conservative groups?

Last week, FCC Commissioner Ajit Pai, who believes the government has no role in how a certain story is covered, disclosed in a Wall Street Journal Op-Ed the existence of the new FCC plan that will ostensibly “study” how media organizations report the news.

Last May the FCC proposed an initiative to thrust the federal government into newsrooms across the country. With its “Multi-Market Study of Critical Information Needs,” or CIN, the agency plans to send researchers to grill reporters, editors and station owners about how they decide which stories to run. A field test in Columbia, S.C., is scheduled to begin this spring.

The purpose of the CIN, according to the FCC, is to ferret out information from television and radio broadcasters about “the process by which stories are selected” and how often stations cover “critical information needs,” along with “perceived station bias” and “perceived responsiveness to underserved populations.”
The news was jarring, so I downloaded the FCC’s “Research Design”[3] and read it for myself.
What I found was even more disturbing than what Mr. Pai reports.

If radio and television stations resist coughing up confidential employee data (including demographic information) to aid the FCC monitors, the study also (on pages 10 and 11) provides helpful “strategies” for obtaining information — even when employers and their Human Resources departments refuse to cooperate.
How reassuring that the federal government is devising new ways to violate the privacy of reporters, editors and their employers — all to make sure news outlets are providing Americans with the news the Obama administration says they “need.”

The roadmap to censorship is clear. Expect this study to show that some news organizations are failing to cover the “right” stories — thus failing to give the people what they “need.”

Then, the FCC — which owns the airwaves — will propose to swoop in and fix the “market failure” by making sure that Americans learn what they “need” to learn — regardless of their own preferences.

And what does the FCC prioritize? If its list is any indication, it prioritizes the “environment” far above the “weather,” while war news barely makes the list.

So I suppose when storms are brewing it’s more important that I learn about carbon credits than where a tornado might touch down? And just don’t you worry about what’s happening in our war against jihadists.

From its inception, the Obama administration has proven that it’s not only intolerant of critics, but that it will use the full power of an increasingly partisan bureaucracy to intimidate Americans and rein in dissent. The administration turned the IRS on the Tea Party, it unleashed the Department of Justice on wayward reporters, and now the FCC is preparing to snoop into America’s television and radio studios.

In an era of divided government, it’s sometimes difficult to stop Obama administration excess, but this call to action should be easy: Under no circumstances should the House of Representatives allocate even a single dime of taxpayer money to authorize or empower government monitors in any newsroom in America.

The free press is at stake.

If you are currently one of those people who stay out of politics because you hate politics, listen to me: WE ALL HATE POLITICS! Because of our natural subversion as good people to confrontation and nastiness we have all stayed away from politics. NSA spying on Americans, government run healthcare, IRS targeting Americans who are non-compliant with the current political regime and now the FCC planting monitors in newsrooms across America should really be reasons to bite the bullet and DO SOMETHING! America, get your head out of the sand and start reading your Bill of Rights before you have no more rights!