What This Liberal Says About Not Working Will Drive You INSANE 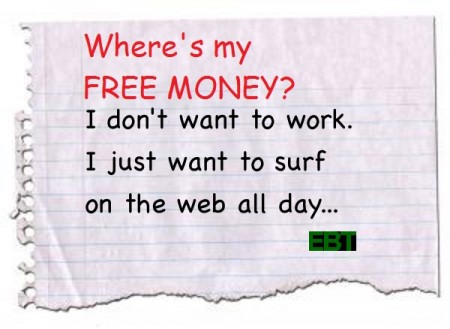 “Why I don’t get a job, it takes up too much time, I don’t really want to deal with people; I just don’t want a job. I think I should always be given free money. Why work for money? I don’t believe in working. I don’t care about putting food on the table. I believe I should get paid for my graded. I believe I should get paid for education. I have too many hobbies to keep up with to have a job, I’m way too talented to have a job. I’m one of the lucky ones that gets free money. I honestly don’t want to work, I’m not going to, you can’t force me. I’m having fun without working.”

Generally speaking, when someone doesn’t have a job it’s because they either can’t find one or because they have some sort of ailment that prevents them from working, but that’s generally speaking. There are many out there who just refuse to get a job because they feel they’re above having to work for their money, and the girl in this video is one of those people.

The eight-minute clip is of her explaining why she shouldn’t have to work for her money and it all boils down to one word, entitlement. She would rather be a societal leech than actually endure the hardships of having to actually degrade herself and get a job, as if degrading herself any further were even possible.

She feels she’s far too talented to do what the rest of us do daily, and tries to justify it by explaining she doesn’t care about money in the least, but forgets that someone has to pay for her pathetic existence. These are the very people who are pushing our nation further towards collapse, sucking off of the taxpayers and doing nothing to be productive to society to help pay for all the wonderful programs she’ll more than likely depend on when her parents kick her out.

You’ll really love the end of the video where her entitled attitude and disrespect for others shines when an interaction with her mother is captured.

Americans need to stop killing America by allowing citizens to not work. As you can tell in the video the girl has no self esteem or desire in life. The ONLY thing that can give you a self esteem is work. Hard work and work done well will improve your mood and raise your opinion of yourself. It cannot be taught in a classroom or given by a parent or partner. ONLY your own two hands can give you self worth. Welfare is destroying the personal self worth of Americans by destroying their will and desire. Do everything you can to stop welfare from voting against it at the voting booth to teaching your children at a young age the value of a healthy work ethic. Obviously this woman’s mother didn’t teach her.

Horrible: Woman’s Abortion Will Improve Her Chances To Be On Reality Show