Why is the Justin Ross Harris child left in hot car death a national story? Is it because he’s a White Southerner? 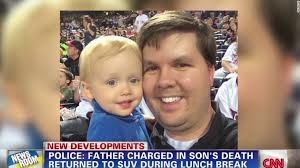 [2]giving him an overdose of cough medicine.

Today a 15month old boy[3] left in a hot car, alone, died. It’s a tragedy that’s very common. So much so that in the past five years 151 children have died as a result of being left alone in a sweltering automobile. That’s roughly an average of 32 deaths a year or two a month.

So why is the case in Georgia being treated as if it’s a unique incident? My suspicion is that it’s all about a media template that is critical of Southern White males being the cause of all trouble going on in this country as far as the Leftist media is concerned. : Justin Ross Harris may or may not have committed murder. That’s up for a jury to decide. But, the attention he’s getting is very telling and a agenda-driven media is out for their pound of flesh for a very common crime.