Why Stop and Frisk Wasn’t Racial Profiling: NYPD stats: 70% of shooting suspects in first half of 2013 were black

Progressives like radical Leftist and Obama-ite Bill de Blasio screamed racial profiling and hoodwinked the minority community to foolishly vote him in as the next mayor of New York.

Now the city is poised to embark on a path of “politically correct policing”, the kind they have in Chicago, Detroit, and Killadelphia.:  So those very blacks and Latinos might rue the day New York no longer is the safest big city in the country so they can claim they stop racial profiling as they dodge fresh bullets that will be unleashed on the city.: 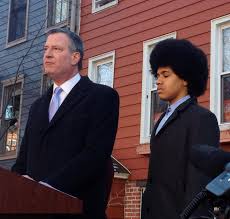 New York Daily News[2] reports data collected during the first six months of the year also reveal that 74% of the city’s shooting victims were black, and an additional 21.5% were Hispanic. NYPD top cop Raymond Kelly has used similar numbers to justify stop-and-frisk, while black community activists say the frustrating statistics reflect the stark reality of economics in poorer neighborhoods.

Blacks also accounted for the majority – about 70% – of the 222 people arrested for shooting someone during the first half of 2013, according to the NYPD’s Crime and Enforcement Activity report.

Black community activists said the frustrating statistics, which have barely fluctuated since 2009, tell the stark stories of economics in poorer neighborhoods and the NYPD’s laser-like focus on communities of color.

: “It’s all a battle between the haves and the have-nots,” said Tony Herbert, president of the National Action Network’s Brooklyn East Chapter. “In the end, it’s survival of the fittest, and there are some who want to bring weapons into the mix. That’s what it comes down to.”

“Last year, 97% of all shooting victims were black or Hispanic and reside in low-income neighborhoods,” Kelly recently said as he lashed out against Judge Shira Scheindlin’s decision that stop-and-frisk was unconstitutional and appointed a monitor to oversee the program – a reform put on hold after the city appealed. “There were more stops with suspicious activity in neighborhoods with higher crime because that’s where the crime is.”

Was a 10 inch Afro worth the coming blood on the streets?