Woman Who Said Obama Would Pay her Gas and Mortgage has an AMAZING change of mind about Obama & America!

Remember the viral video from the 2008 presidential election, showing a sycophantic Obama supporter, caught up in the “hope and change” mantra, believing that his election win would put an end to her having to pay her own gas and mortgage bills? Looks like #1 Obama fan has transformed and changed her tune about Obama and ‘got involved inn politics’.[1] 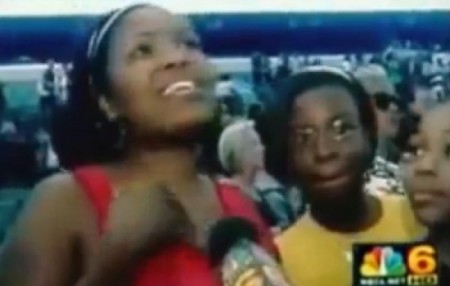 Joel Gilbert caught up with Peggy Joseph for the filming of his new full-length documentary film, “There’s No Place Like Utopia,” six years after Joseph thought that Barack Obama would pay for her gas and her mortgage. Ms. Joseph told Gilbert, after viewing the 2008 segment together that gave her notoriety, that not only has Obama not been paying her gas or mortgage, but both have gotten progressively harder to pay.

“During that time, we needed a change, but change for the better, not for the worse,” an awakened Peggy Joseph told Gilbert.

“He had a very big voice, just like the Wizard of Oz,” Joseph said, comparing Obama to the famous phony wizard. “The wizard was this little teeny-teeny tiny man, and I think it’s the same thing with Obama, the man behind the curtain,” Ms. Joseph said in a reflective, disappointing tone.

Ms. Joseph looks back at the time of her 2008 interview, saying, “I was Dorothy in the Wizard of Oz. That’s how I feel.”

“What I learned is never trust the Wizard,” Joseph now says. “It’s within ourselves to have the determination, the courage, and the brains, to bring us to our destiny.”

Gilbert told WND that he was shocked to find Peggy Joseph “was a suburban soccer mom with four children, who earned her living as a hard-working nurse, the daughter of Haitian immigrants,” and had “no history of ever accepting any form of government assistance or taxpayer-funded handouts.”

Mrs. Joseph is just one of millions who believed Obama was going to make life finally easy for everyone. Glad she’s woken up from the childish acceptance of Obama’s empty rhetoric of “hope and change’. It’s nice to see that common sense can return after the Obama hysteria subsides.

Also see,
Obama Voters Say You Have to Pay Their Way[3]