Anyone who took high school economics could see this coming. Waterford, Michigan-based Yankee One Dollar Store is closing all its remaining locations, blaming Obamacare and a hike in the minimum wage[1]. 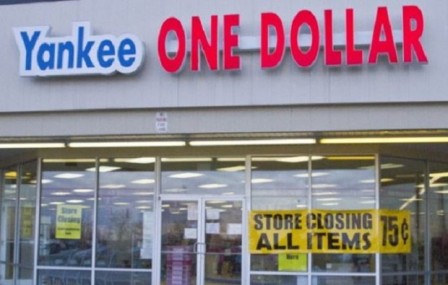 Duh. Raising the minimum wage doesn’t help if it means there will be even fewer jobs to go around, which is definitely the case in Michigan.

Waterford-based Yankee One Dollar stores will be gone within the next five months, its owner told the Post Star of Glens Falls. Keith Flike blamed the Affordable Care Act and the increase in the state’s minimum wage for the decision to shut down. Each store has six to 10 employees, he told the Post Star.

Yankee One Dollar has 23 stores, down from a peak of 39. The Daily Gazette reported stores at Crosstown Plaza in Schenectady and at Rotterdam Square mall would close. Yankee One Dollar also has stores at Hudson Valley Plaza in Troy and in Waterford.

Small, local companies like Yankee One Dollar are always the hardest hit by expensive government regulations. As these businesses close, gigantic corporations move in to hog even more of the market share. They’re the only ones who can afford it.

Remember that the next time a liberal complains about “big business” and the Wal-Martization of America.