Lots o’ stuff on the “racist’ tea parties today, for example, at Powerline, “The Smear Continues[1].” John Hinderaker laughs at the study from the University of Washington Institute for the Study of Ethnicity, Race & Sexuality, “2010 Multi-state Survey on Race & Politics.” And of course, the university’s research was picked up by Newsweek, “Are Tea Partiers Racist? A New Study Shows That the Movement’s Supporters Are More Likely to Be Racially Resentful[2].”

Or, ah, maybe they mean resentful like [email protected][3] who (nearly unintelligibly) asked Michelle Malkin, “I just wondering how or where did you learned to speak like the way you do? Because you are are not white, and that is obvious …[4]”

Either way, the smart folks at Brandeis University are on the case! See Michael Graham’s earlier post, “I Wonder If Brandeis Has Invited Nancy Pelosi To Speak At This Event?[5]“:

This is NOT a parody. It’s not a poster put up by some kooky student or lone Left-Wing agitator. This is an official poster for an official, school-sponsored symposium at Brandeis University: 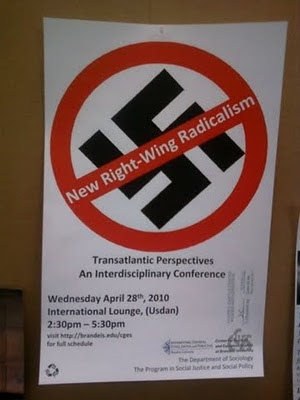 The symposium will be a look at the American Right from a “neo-Nazi” perspective. And when Brandeis says “Neo-Nazis,” they mean “tea partiers.” Think I exaggerate? Check out the web page for the event …

I have said something like this before, but at the risk of being a bore, and because of the times in which we live, I will repeat myself:

The real reason liberals accuse Tea Partiers of racism is that contemporary American-style liberalism is in rigor mortis. Liberals have nothing else to say or do. Accusations of racism are their last resort.

The European debt crisis – first Greece, then Portugal and now Spain (and Belgium, Ireland and Italy, evidently) – has shown the welfare state to be an unsustainable economic system. The US, UK and Japan, according to the same Financial Times report, are also on similar paths of impoverishment through entitlements.

Many of us have known this for a long time, just from simple math. Entitlements are in essence a Ponzi scheme. Now we have to face that and do something serious about it or our economy (the world economy) will fall apart.

Liberals, leftists or progressives – whatever they choose to call themselves – have a great deal of trouble accepting this. To do so they would have to question a host of positions they have not examined for years, if ever, not to mention have to engage in discussions that could threaten their livelihood and jeopardize their personal and family associations.

Thus the traditional wish to kill the messenger who brings the bad news: the Tea Partiers. And the easiest way to kill them – the most obvious and hoariest of methods — is to accuse them of racism. Never mind that there is no evidence – or what little evidence proffered has been shown to be manufactured prevarication – liberals must continue the racism meme at all costs. There is no other. To engage the Tea Party Movement in a battle of ideas would be suicidal for them, because the basic economic tenet of American liberalism – an increase in government spending and consequent increased national debt is good for society – seems nonsensical to the vast majority of our citizens at this point in history. And for good reason.