The tabloid war against the NYPD continues with this outrageous accusation by the Daily News saying a crackdown on illegal cigarettes contributed to Eric Garner’s death. This is nothing but 21st century Yellow Journalism! I’m posting the article even though it’s a bunch of garbage.

The YellowNY Daily News[1] reports an order to crack down on the illegal sale of 75-cent cigarettes in Staten Island came directly from Police Headquarters, setting off a chain of events that ended in Eric Garner’s death, the Daily News 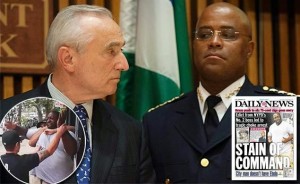 Chief of Department Philip Banks – the highest-ranking uniformed cop in the city – sent a sergeant from his office at 1 Police Plaza in July to investigate complaints of untaxed cigarettes being sold in the Tompkinsville neighborhood, a source close to the investigation told The News.

“(Banks) set the whole thing in motion,” the source said.

The sale of loosies had been on Banks’ radar since at least March, when it was discussed at a meeting at Police Headquarters about quality-of-life issues, a police source said.

Banks’ office also conducted surveillance on Bay St. and took pictures, one of which shows three men believed to be involved in an illegal cigarette sale. The News reviewed the photograph and Garner is not in it.

At around the same time, on March 27, a caller to the city’s 311 hotline complained about the issue, saying a group of men had been selling untaxed cigarettes, and sometimes marijuana, on Bay St. every day for the past three years, a second source said.

The caller identified one of the sellers as “a man named Eric.”

The next day, Garner was arrested for selling untaxed cigarettes, one of three pending cases before his death.

Sometime in early July, a memo was sent to the Staten Island borough command, a source said. The memo stressing the need to address quality-of-life issues was then forwarded to bosses in the 120th Precinct for “immediate attention,” according to the source.

On the afternoon of July 17, cops spotted Garner on Bay St. again. Witnesses said Garner, 43, had just broken up a fight. Cops say the 350-pound father of six was selling untaxed cigarettes.

The New York Daily News should hang their heads in shame! I never seen the 2nd top cop attacked. But, they surely did it to the black guy.