Yet Another Obama-Funded Electric Car Company Goes Belly Up 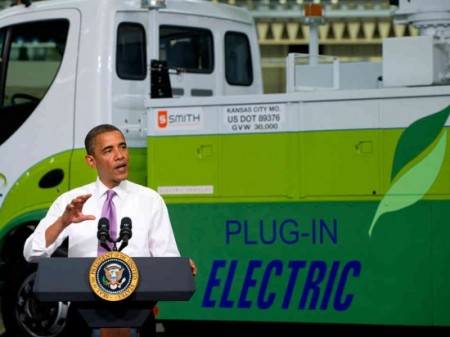 Critics of Democrats calling for additional subsidies for electric vehicles are pointing to the financial troubles of one stimulus-backed car producer that just announced it is closing its U.S. plant.

Missouri-based Smith Electric Vehicles: said[3]: this week that it is suspending operations in the United States due to a “tight cash-flow situation.”

Its financial troubles came despite nearly $30 million in funds from the Department of Energy (DOE) granted to the company through President Barack Obama’s 2009 stimulus package.

“You’re setting a model for what we need to be across this country,” Obama said when he visited Smith’s Kansas City production facilities in 2010.

“You’re doing more than just building new vehicles,” Obama said. “You are helping to fight our way through a vicious recession and you are building the economy of America’s future.”

The DOE grant was supposed to support the construction of 510 electric vehicles for municipal public transportation. The company had put 439 vehicles in service by the end of 2013, according to: recovery.gov[4], using $29,150,672 in taxpayer funds.

He’s not a venture capitalist. : They use their own money.

He’s just a typical Marxist. : No idea about business but freely wastes everyone else’s money.