Lost amidst all the hubbub about what a perfect-ten skit opened last weekend’s Saturday Night Live — by the way, I’d characterize it as a “well above par nine,” but who’s counting — was a far more poignant commentary about forty-five minutes in (counting commercial breaks). It was during the Weekend Update segment, when Amy Poehler was interviewing “Alaska Pete,” a clumsy caricature of the slobbering Palin fan…like me.

Not to worry, I took it in good humor. I just thought this exchange was interesting. The Manhattan crowd, you’ll be pleased to know, has finally come up with a sound bite to answer this Fred Thompson thing about field-dressing a moose. It’s a rhetorical question.

Alaska Pete: Yeah, she’s gonna be the best Vice President in history. She’s a flip! That woman can field dress a moose!

Amy Poehler: What does that have to do with being Vice President?

Awesome! That’s what the election is all about. It cuts to the very heart of Sarah Palin’s weakness as a candidate. It highlights her irrelevancy. And best of all, it can’t be answered!

It is Yin and Yang. Which could be thought of as a derivative offshoot of Carl Jung’s introverts and extraverts. Except it’s not the same thing.

Recall that an introvert is someone who is quiet, reserved, thoughtful, and self-reliant[12] whereas the term “extravert” is used to refer to people who are are often leaders, work well in groups, and prefer being with others to being alone[13].

Yin and Yang is slightly different from that. The best way to describe it is in term of effort; lifetime effort. Introversion and extraversion are states — Yin and Yang are activities. They refer to the wrinkles we carve in our brains, womb-to-tomb, as we take on life’s little challenges in the manner we have conditioned ourselves to think.

You can certainly be a Yin and at the same time be an extravert. Sarah Palin herself may very well be an excellent example of this. I can’t state that for certain without getting to know the lady and spending a great deal of time around her, something that isn’t likely to happen. One of the things I’ve noticed about these people is that the more intelligent they are, the harder it is to figure out whether they’re Yin or Yang, even if their inclinations are running very strong under the surface. But from what little I’ve seen, Palin seems to be strongly extraverted.

Extravert or not, however, Sarah Palin is definitely a Yin. And the nation is hungry for Yin in their leadership positions. Field dressing a moose, to answer Poehler’s question, exemplifies the very definition of Yin because you can’t do any field dressing until you have a body to dress.

This also explains why there is so much anger at Gov. Palin for coming as far as she has as quickly as she has. What she’s done is beat super-Yang Barack Obama at his very own game. This term “natural born leader” that is so often affixed to the Yang, is actually a myth. It’s really there only to make them feel good. Leaders decide things. They do not depend on others to decide things.

They often end up in charge of things. That’s why groups of people don’t excel at making good decisions. Too often, they are commanded by someone whose lifelong pursuits involve running to the front of this or that parade…after they figure out where it’s going. It’s a rather glittery, gaudy and empty form of leadership.

The big elephant in the room is that the Yang don’t really want to run anything. They aren’t self-sufficient. The personality of a Yang is the culmination of a lifetime spent eluding Rumspringen[14] — this is what leads to the extraverted behavior. It isn’t so much that in solitude they are lonely, although there may be some of that; instead, it’s that in solitude they lose their cognitive ability. Their methods of deciding what to do have to do with resonating emotionally with those around them. And that includes Barack Obama. They want the identity that comes from having one’s name in a box at the head of an org chart, but getting stuck with a decision that might turn out to be rotten later on, really puts ’em off. A new “Dilbert” cartoon is born every time they figure out how to grab the credit for making one of these decisions, without being bogged down by the associated blame should it turn out to be wrong.

That, Ms. Poehler, is what field dressing a moose has to do with executive authority at the top of this nation’s government. I’m unacquainted with moose hunting myself, but it isn’t too hard to guess: Perceiving, molding, shaping and commanding a group consensus doesn’t do you an awful lot of good out there. 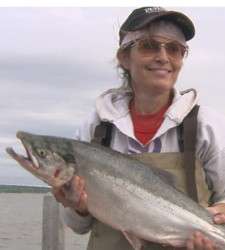 This is powerful, because it transcends liberal-versus-conservative. It’s even more powerful than that other issue of which party is going to elect the first woman President in our nation’s history. We need some real leadership; people who know right from wrong, not just talk a good game about it. We don’t need more “articulate” people, regardless of their skin color. We have a rich history, as it is, of confusing real leadership with gift-of-gab. Maybe, just maybe, we’re growing out of it now. Maybe we’re starting to realize that we don’t need better salesmen.

After all, a good salesman is something you need if the thing you’re trying to sell is a piece of junk.

A good thinker, on the other hand, is something you need when there are decisions to be made, and they’re important. Our ivory-tower blue-staters will go to quite a few lengths to avoid admitting this…but fishing and hunting takes real brains. Not just talk-a-good-game brains, laughey-talkey-jokey brains, but figger-out-what-to-do brains.

So with that in mind, the nation turns it’s lonely eyes to someone who’s clearly better practiced in making good decisions, than in ducking the blame after making poor ones.

Thing I Know #110. Everyone’s willing to bet an unlimited measure of resources from a company, corporation, committee, council, organization or club, that the “smartest guy in the room” really is the smartest guy in the room. Because of that, the smartest guy’s ideas usually go unopposed. I have noticed it’s extremely rare that anyone, anywhere, would bet one dime of their personal fortune that he’s really that smart. This may explain why some of the best decisions I’ve seen, were made outside of conference rooms.[15]

Cross-posted at House of Eratosthenes[16].