Your Pink Tank Convinced Me That The War On Terrorism Is Wrong!

This is going to be hard for me, very hard indeed. But…sigh…I realized that I was wrong about the war today. We never, ever, should have invaded Iraq.

So why did I back the war for so long? Well, I have to admit that I was seduced by the logical and reasoned arguments for going to war. After all, the only hope we have of preventing future 9/11s and worse, much, much worse, is to go after not only the terrorist groups with global reach, but the rogue states that back them.

By taking out Saddam, we not only struck against an anti-American, mass grave filling thug who either had or would have reconstituted his WMD[1], but we knocked out a tyrant who had direct ties to Al-Qaeda[2]. It all makes soooooo much sense…until you stop thinking about it logically and just let the pictures speak to you.

What pictures you say? The pictures from the protests in Britain that I got from UK Indymedia[3]. Now I know what you’re probably thinking, “Come on Hawkins, those people are a big bunch of ‘useful idiots[4]‘ for Saddam and the terrorists!”. Sure, that’s true, but you have to set aside logic, facts, and common sense and just look at the pictures. Let me give you some examples. Here are 3 pictures, all followed by what each pic said to me…when I let them into my heart!!!!!!! 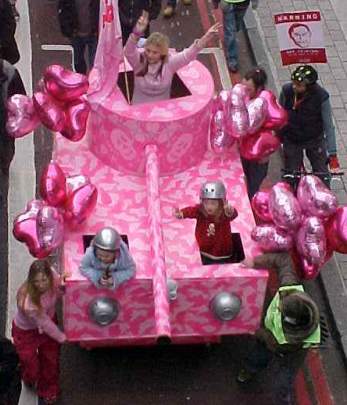 “Our pink tank filled with children will stop terrorism!” 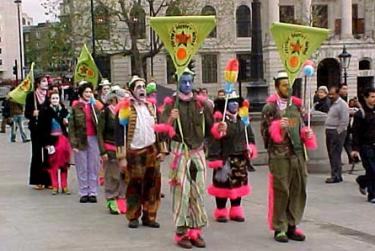 “Our facepaint and puckish attire proves we’re right about laying down for terrorists!”

“Mindless slogans and street theater will make the world safe from Al-Qaeda!”

“In a situation like this, of course you identify with everyone who’s suffering. (But we must also think about) the terrorists who are creating such horrible future lives for themselves because of the negativity of this karma. It’s all of our jobs to keep our minds as expansive as possible. If you can see (the terrorists) as a relative who’s dangerously sick and we have to give them medicine, and the medicine is love and compassion. There’s nothing better.”

That’s right folks, maybe if we Americans weren’t so concerned with building democracies in long suffering countries and stopping terrorists who want to murder all of us, we’d take the time to give a little love to the terrorists and Saddam Hussein. That’s what the protestors taught me folks & I hope you can learn from them too…..