Hillary, thy name is hypocrisy[1]. How appropriate it is that the Hildebeast holds a fundraiser in the $11.4 million dollar home of ambulance chasers, er… personal injury attorneys, where outside the valet attendants make $10 an hour. A couple of days later, the Marxist-in-a-skirt goes all populist with the unions and royally decrees that the downtrodden should make $15 an hour. But that only applies to the little people out there, not to her hind ends and to her servants. As one valet supervisor sagely put it, ‘We’re sunk if she gets elected,’ he said. ‘She’s going to take us down the wrong path.’ That’s putting it mildly… it would be the absolute end of the Republic and freedom as Americans know it. 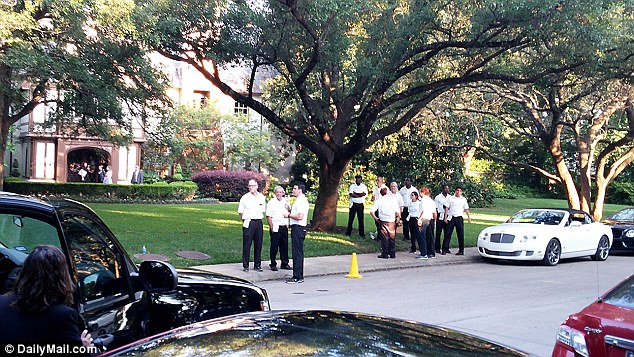 SHE DOESN’T MEAN YOU: Valet parking attendants outside Hillary Clinton’s June 3
fundraiser in Dallas earned $10 per hour, according to the crew chief, but by June 7 she
told a labor union she backs a $15 per hour minimum wage.

Hillary Clinton came out swinging on Sunday in favor of a $15-per-hour minimum wage for service-industry workers, something that may surprise the valet parking attendants who moved her donors’ luxury cars four days earlier for a $10 wage.

The Democratic front-runner phoned in speak to a meeting of 1,300 fast-food workers organized by the Service Employees International Union, a reliably liberal source of campaign cash for whoever wins the Democratic presidential nomination.

‘It is wrong that so many people stand against you thinking that they can steal your wages with no consequences,’ Clinton said. ‘That even stacks the deck higher for those at the top.’

Those at the top include the multimillionaires assembled on June 3 at the Dallas home of trial lawyers Frank and Debbie Branson – a group who pulled up in Bentleys, Maseratis and Teslas and tossed their keys to waiting attendants earning far less than what Clinton now says is fair.

As the party ended, with an estimated $216,000 dropping into Clinton’s campaign coffers, the everyday-American parking attendants raced around the neighborhood on foot to find more than 60 cars for their waiting owners, queueing up in front of the $11.4 million home.

Clinton herself arrived in a 2015 Cadillac to collect $2,700 per attendee.

But by Sunday she was back in populist mode, pitting line workers against their greedy overseers.

‘I want to be your champion,’ she told the SEIU gathering. ‘I want to fight with you every day.’

‘I’m well aware that the folks on top already have plenty of friends in Washington, but we together will change the direction of this great country.’

A crew chief with Gold Crown Valet Parking of Dallas, which had 16 parking attendants on the scene Wednesday night to handle the guests’ high-end cars, told Daily Mail Online that the valets earned $10 per hour.

A few, he said, earn more if they have been with the company a long time.

Another supervisor, who only identified himself as ‘Russ.’ said he had mixed feelings about servicing an event that could help Hillary Clinton grease her path to the White House.

‘We’re sunk if she gets elected,’ he said. ‘She’s going to take us down the wrong path.’

The SEIU has long agitated for fast-food restaurant companies like McDonald’s to unionize their employees, using ‘Fight for $15’ as their battle cry.

It also manages a parallel program for daycare workers, demanding the same $15/hour minimum for them.

Clinton addressed that campaign’s leaders on May 20, supporting their efforts.

Moving to a $15/hour minimum wage nationwide would more than double the current minimum of $7.25.

President Barack Obama has advocated for a more to a $10.10 minimum wage. That more modest increase would likely cost the U.S. economy 500,000 jobs, according to a February 2014 analysis published by the nonpartisan Congressional Budget Office.

The CBO said the hit on employment could put as many as 1 million Americans out of work.

Obama’s chief economic adviser, Jason Furman, said then that ‘zero’ was a better estimate of the potential impact on jobs.

Business groups that advocate against minimum wage hikes argue that when employers are forced to pay their entry-level workers more, they tend to hire fewer of them and dismiss existing employees with the least experience.

Those unlucky workers tend to be young, under-educated people from minority groups.

Despite complaints from businesses – and the taint of hypocrisy from parkign atttendants outside her campaign fundraising events – Clinton said Sunday that she expects low-wage workers to continue fighting for higher wages.

‘I hope that every one of you will continue to raise your voice until we get all working Americans a better deal,’ she said.

The former secertary of state rushed from last Wednesday’s Dallas fundraiser to a waiting private jet at Dallas Love Field without stopping to take questions from reporters or talk to anyone who wasn’t on the fundraiser’s guest list.

The chutzpah of Clinton knows no end. She’ll pound out any lie that might even remotely win her a vote. Pitting the rich and the poor against each other, digging a racial divide meant to create chaos and violence and schmoozing with the wealthy and elite is just another day on the campaign trail for this witch. She’s probably smirking about what rubes American voters are for falling for her drivel. The Marxist policies of Obama and Hillary are death on a cracker for America. One third of the nation is currently unemployed and they are doubling down on side lining even more workers, while lining their pockets at every available opportunity. Even the workers get that she would destroy what little is left of the Constitution. So, while the valets work their butts off parking Bentleys, Maseratis and Teslas for Hillary, she is refusing to even talk to anyone who is not on her select guest list and flying off in her private jet… you know, like the little people do all the time. 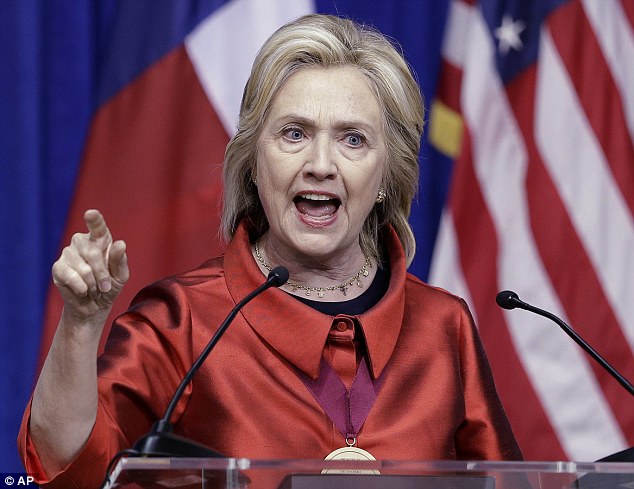