Unions aren’t very popular with Americans anymore, possibly because of their thuggish and mafia-esque tactics and practices. It’s not really surprising, therefore, that SEIU took a big hit when Michigan ended forced unionization. 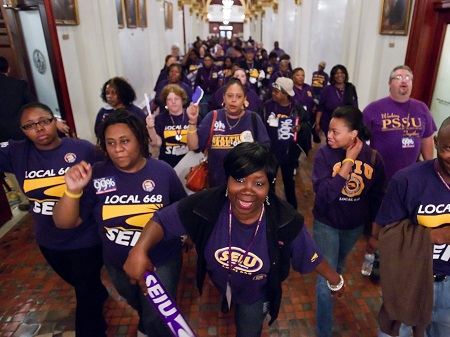 A Michigan branch of the powerful Service Employees International Union saw its membership and revenues plummet after the reversal of a measure that forced caregivers tending to friends or relatives to be members with their dues paid by those they cared for.

More than 44,000 home-based healthcare workers parted ways with SEIU Healthcare Michigan after learning they did not have to join the union or pay dues, according to reports the union filed with the U.S. Department of Labor. Thousands of the employees were allegedly forced into the union under a plan the SEIU successfully lobbied for that classified even unpaid family members caring for their elderly parents as “home health care workers.” Dues were then automatically collected from the care recipients’ Medicare or Medicaid checks.

There’s a reason that unions fight tooth and nail against states getting rid of forced unionization. It’s because they know good and well that most people won’t choose to join and fork over a good portion of their hard-earned money to a group of bullies who are willing to give them very little in return.