$1,000 Reward Offered for Information on This Disturbing Attack on a Girl Holding a Small Child

It’s awful enough to be the victim of an assault, but a new video takes it to a horrifying new level. In the video, two girls attack another girl while she’s holding a toddler, causing the toddler to fall to the ground and scream hysterically while the girl is beaten. 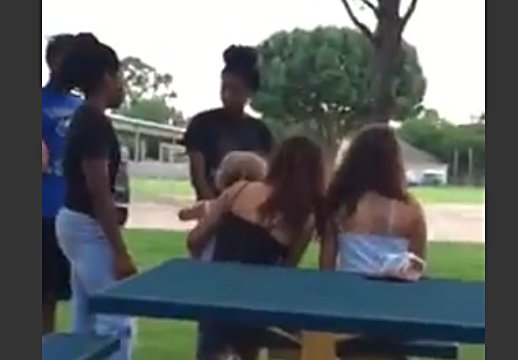 A video posted online Tuesday shows a young girl being savagely assaulted while she was holding a young child. The sickening video was going viral on Wednesday and a website was offering a $1,000 reward for information on the attack to turn over to police.

The disturbing video shows two young females demanding the girl holding the baby “get up,” presumably to fight. When the girl, still holding a young child, didn’t get up, the attacker is seen dragging her out of her seat by her hair, sending her and the child tumbling to the ground.

The young child can be heard in the video crying hysterically.

The unidentified attacker then brutally punched and kicked the female victim while keeping a grip on her hair. At one point, a male bystander is actually seen dancing during the shocking attack.

The motivation behind the assault wasn’t immediately known. It also wasn’t clear where and when the video was recorded.

… The lack of information on the shockingly violent incident apparently moved The Last Refuge blog to offer a $1,000 reward for information leading to identifying the “person(s)” involved in the assault.

There isn’t much that could be considered more disturbing than that video, and the thugs responsible should not be allowed to walk freely on the streets. Hopefully the lure of a $1,000 reward will be enough to convince someone to come forward.