People are talking like crazy about the recent YouTube upload featuring a fist fight in the deli aisle of Publix. Disabled shoppers and crying babies be damned, they were gonna have it out with each other- right next to the potato salad and smoked turkey[1]: 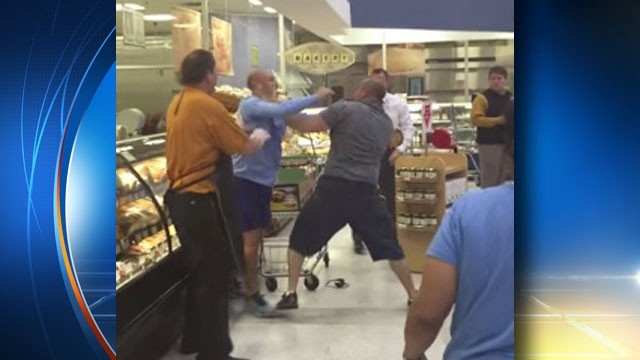 The person who uploaded the video said it happened just after 5:30 Monday night at the Publix grocery store in an upscale Orlando neighborhood.

In the background, you can hear a crying child.

Then a worker is heard saying, “Guys, come on.”

And then one of the men in the fight screams, “Are you out of your mind? That’s my pregnant wife, bro!”

Shoppers watching the video called it “uncomfortable” and said “It definitely spoils the shopping experience.”

“I think it’s horrible. I’d never expect it. Definitely with this type of neighborhood and being Publix,” said another shopper.

The men went at it despite shoppers around them including a woman with a cane and a mother and baby until Publix workers got in the middle.

“You’re out of your mind,” screams one of the men in the fight. “I’ve got a nine and a half month pregnant wife!”

Publix spokesman Brian West said in a statement, “We do not know the details that lead up to the incident, but we’re thankful that neither the customers near the incident or our associates were injured.”

The cause of the brawl is ‘unknown’, but near the end of the video, one of the men states ‘I have a nine and a half month pregnant wife, you low-class piece of sh*t.’ This leads me to believe this was started by a perceived glance at the other man’s wife/girlfriend/sister/female companion of any kind. Either way, guys, fighting in a Publix? Really? This isn’t the sandbox in nursery school. Let’s act like grown men, ok?