Every child wants mom and dad in the audience at graduation. To see them cross that long finish line of education before heading off to college for just a few more years. Steven Turner Jr. knew that his mom wouldn’t be part of his special day, so when he got his diploma, he never expected to share the moment with her:[1] 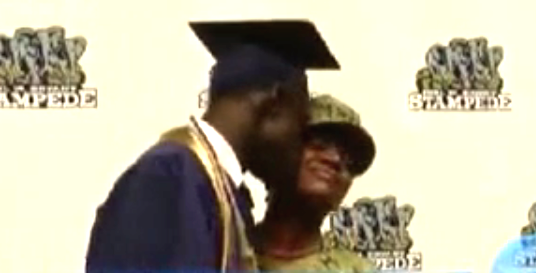 Steven Turner Jr. hadn’t seen his mother — who’d been deployed to Guantanamo Bay — for nine months as he crossed the stage in his cap and gown at Tuscaloosa, AL’s Paul W. Bryant High School to receive his high school diploma.

But she had a surprise for him.

As she told reporters:

It was an especially proud moment for Turner: Her son had gone from an underperforming student in middle school to an honor roll student with a full scholarship Alabama A&M, with plans to major in electrical engineering and minor in musical performance.

Turner had decided a month earlier that she would return for his graduation, and kept it a complete surprise—she didn’t even tell her husband.

I don’t know if I could keep such a big secret from my husband, but the smile on her son’s face and his overwhelming happiness brought more than a few tears to my eyes. Sometimes we tend to forget that our soldiers are people with families, who have left their kids at home while they go out and defend our country. We focus too much on the fact that maybe we don’t agree with the job they are doing, or the war that they are fighting. Every soldier has a special someone that they go home to. Let’s never forget that.