AMAZING: Video Shows How Far A Mother Will Go To Protect Her Baby

There are those who say a mother’s love[1] is the strongest force on Earth. Judging by this video, I’d be inclined to agree. 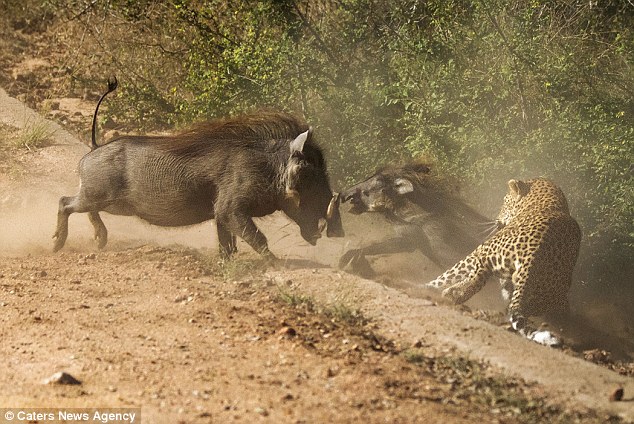 This is the heart-stopping moment a warthog mother had her baby snatched by a hungry leopard.

The dramatic images show the leopard pounce on the warthog piglet and sink its teeth into its neck.

Desperate to save her baby, the mum charged full force at the leopard causing it to lose its grasp on the piglet, sending it flying through the air.

The brave mother then chased the leopard away and escaped with her baby, leaving the leopard with its pride dented and stomach empty.

The incredible images were taken by photographer Koos Fourie while on holiday with his family at Kruger National Park, South Africa.

Mr Fourie, 60, from South Africa, said: ‘We saw the three warthogs running in the road ahead of us.

He added: ‘I decided to stop to take a picture of the warthogs. I parked my vehicle in the road, opened the window and focused on the biggest warthog.

‘When I pushed the shutter of my camera I heard a noise and thought it was the piglets fighting with one other.

‘But it was a leopard who had appeared from nowhere and caught one of the warthog piglets.

‘The leopard was trying to pin her potential kill to the ground and the piglet was screaming and kicking to try and get away from the leopard.

‘The next moment the mother came running back from behind my vehicle at full speed dropping her head and hit the leopard in the ribcage.

I’ve seen some human mothers who could stand to learn a thing or two from this protective piggie.