The pilot of that plane should have his license yanked. This was one of the closest[1], most harrowing brushes with death I have ever seen. A few seconds after jumping in tandem with a client from a plane in Thailand, Forest Pullman, a skydiving instructor, got the scare of his life. The plane immediately did 180 degree turn and nosedived right at them, clipping their drogue chute. Pullman got them free of the chute and they finished the dive just fine. The tandem passenger had no clue what happened until the team successfully deployed their parachute. But Pullman knew – in those few seconds, he thought they were dead for sure. Luck was with them. 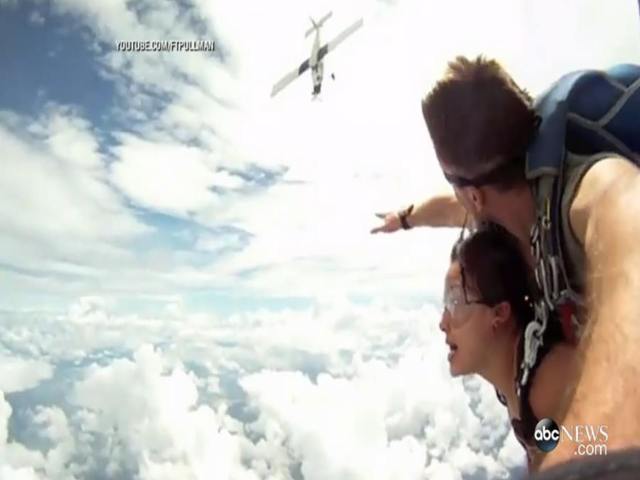 BANGKOK, Feb. 9 (UPI) — A Thailand skydiving instructor shared video of the plane he left on a tandem jump going into a dive and nearly striking him and the woman skydiving with him.

Forest Pullman, an instructor with the Thai Sky Adventure Company in Bangkok, said he and the woman he was strapped to for the tandem jump had only been in the air a few seconds[3] when the plane they left appeared to go into a nosedive and clipped their drogue chute.

Pullman was able to free the chute[4] and get the jump back under control, the video shows.

“The pilot dove the airplane 180 degrees right at me and my tandem passenger. How we got so lucky?!?! Not sure,” Pullman wrote in the video’s description on YouTube[5].

The reason for the plane’s dive was unclear Monday.

Pullman said the video was shot Oct. 19 of last year, but was uploaded to YouTube Friday.

This happened last year – it probably wasn’t posted until legal hurdles were cleared and whatever suits pending were filed. My son skydives. No way would I ever jump out of a plane. I get my thrills in the political and military theaters – but I will say this… it’s one thing to do a jump that is dangerous enough without some incompetent pilot almost taking you out in the process. Why would anyone ever do that? Glad these two are alright – I guess if it does not kill you, it is a thrill of a lifetime and one for the storybooks. That’s way too close for me – my heart was in my throat just watching it.