Bystanders Trap Flasher in a Portable Toilet by Overturning It, Covering Him in Feces in the Process

People don’t tend to take very kindly to other people exposing themselves in public. So when a homeless man decided to do just that, he ended up finding himself in a very messy situation. 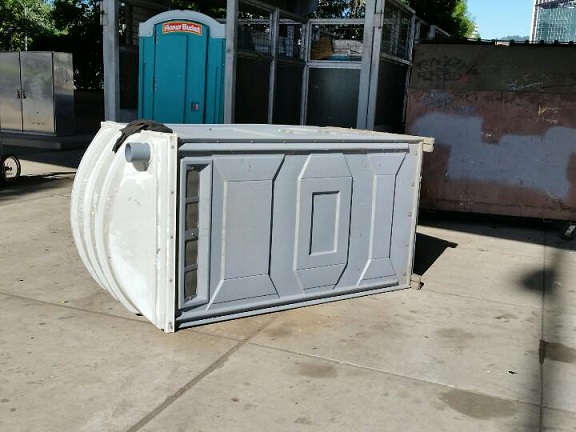 A homeless Oregon man allegedly caught pleasuring himself in a portable toilet was locked inside and covered in human waste after bystanders became fed up with his antics.

The unnamed 48-year-old was found imprisoned inside the overturned toilet Thursday morning after a passerby flagged down a Portland cop.

Police ascertained that some of the man’s fellow homeless people decided to punish him for his alleged lewd act. Written on the dirty side of the toilet was the message, ‘This is what happens.’

… Footage taken at the scene shows police turning over the sewage-filled makeshift prison as a foot kicks frantically at the door.

The man soon emerges, his entire back covered in feces.

He was given a clean pair of clothes and police chose not to charge him.

‘I think justice has been done, so I’m not going to cite him or anything, I’ll just give him a stern warning,’ Sgt. Willie Halliburton told KOIN.

While on the one hand this may seem like some kind of karma, it’s hard to celebrate it too much — this man could be suffering from a mental illness, for example, and tipping over the toilet with him in it could have caused serious injury. But if he does have control of himself and is not one of the many homeless people suffering from mental illness, then hopefully he’ll reconsider next time he thinks about pleasuring himself in public.