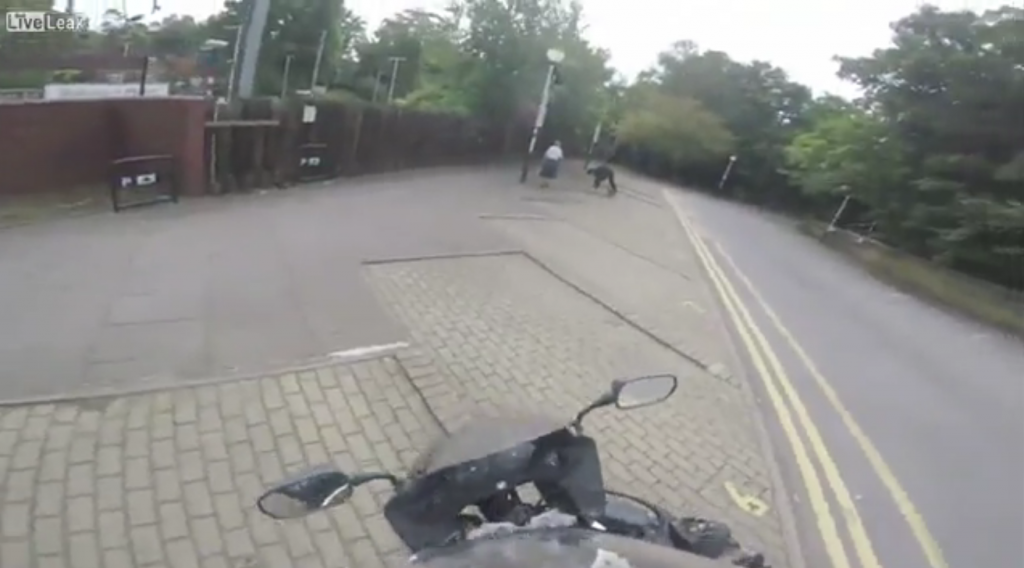 In a new 43-second video taken from a motorcyclist’s helmet camera, we get to enjoy watching a bicycle-riding thief get taken down only a few seconds after his theft is caught on camera.

In England, the video shows the motorcyclist backing out of a parking space. An elderly woman is standing near him, looking at her cell phone. Then, we can see a punk on a bicycle ride up to the lady and steal the phone right out of the lady’s hand and the biker gets off his bike to run straight after the thief.

The cyclist, wearing a black hoodie, track pants and green running shoes, is not fast enough against the biker on foot. The biker not only catches up to him, but also gives him a good clean shove to push him off the bicycle. He hits the asphalt and the woman’s phone drops out of his hand.

The biker tells the cyclist to “stay down” while he grabs the woman’s phone and the thief gets up and makes a getaway… leaving his bicycle behind. The biker yelled at him, but the thief only hesitated for a second before continuing to run. The biker gives the phone back to the woman and we all get to have a laugh and be happy for the contributions of helmet cams to our entertainment.

Thieves getting chased down on camera will always be some of the best footage online. A few years ago, we had a story about CC footage released by a California homeowner who pops out of his house to chase after a mail thief who waltzes up to his front entrance to steal a package on the step.[2] The fit owner almost catches the fat would-be thief before he makes a getaway in his car, but not before the homeowner grabs a bag out of the guy’s car window.

Another favorite is the guy who decided to get back at the thief who had been stealing the Jeep parts that he kept ordering to his home. Before posting the video with a booby trapped box, he posted that he thought “the next one stolen will make for a great video.[3]” When the thief came by to steal the phony package on his door step, the blank 12 gauge shell inside popped off. In the video, she screams and runs back to her car and you can see the homeowner running after her to get her license plate information.