Spawned from the black supremacist Nation of Islam[1], the radical New Black Panthers are prepping a ‘military’ to fight against cops in 2015. Shabazz is simply gleeful at the thought of dead officers in the streets of America. The NBPP has been in the midst of virtually every racially charged confrontation in America for years now, screaming for death to whites and Jews. But the death of cops holds a special hate-filled place in their shriveled hearts and souls. You will find this group heavily connected to the Black Lawyers for Justice, the Black Action Network and the Nation of Islam. You will also find them marching in 2007 in Selma, Alabama with Barack Obama. Oh yes, they have nothing but praise for Obama and Jeremiah Wright.[2] 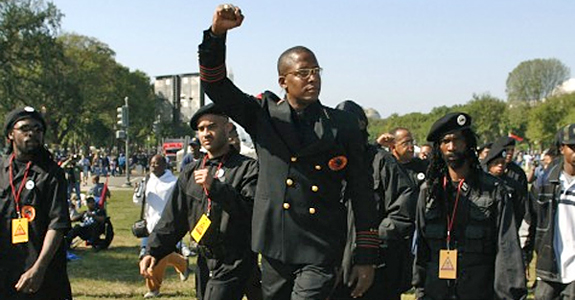 Malik Zulu Shabazz, the former national leader of the New Black Panther Party, said the radical group will “build up an army” in 2015 to combat police, and he predicted coming events “that are gonna seem tragic to white America and may even shock our own consciences,” including the killing of police officers.

Shabazz counseled his followers that some will do things that “shock” their consciences, including killing police officers.

“Sadly because America won’t do justice to black people, more and more people are going to lose balance and go off, and so we’re going to have funerals. Mike Brown gonna have funerals, Eric Garner in New York,” Shabazz said. “All over the country, we’re having our funerals, but now they must put on their dress blues and have their funerals, too. It’s a helluva day in this hour.”

After rallying his followers to “build up an army” and “go to gun range,” Shabazz claimed the coming violent actions will have “nothing to do with us.”

The NBPP is extremely violent and dangerous. Some don’t take them seriously, but they should. They mix beliefs from Islam and Marxism and they are serious when they call for murder. When Malcolm X[4] turned on the Nation of Islam, he was assassinated[5]. So, you see… when Marxists and Jihadists say they will do something, you should listen. The New Black Panthers know a racial rift will expand in 2015, along with chaos and violence and they are putting on their uniforms and polishing their jackboots. They are checking their hit lists twice. As riots and blood spread across America, look for the NBPP to be right in the thick of it.