Giuliani States to Hannity: I Wasn’t Afraid to Call the Mafia what they Were; Why Can’t Obama Call Islamic Terrorists What They Are? [Video]

In the end, Obama’s actions have screamed from the beginning[1] that he believes America deserves whatever she gets for her wonton colonial ways. That is his ideology – he commiserates with radical Islam and silently approves of what they are doing. Giuliani is absolutely correct here – you cannot engage an enemy, much less defeat them, if you are not willing to call them by name. Obama feels he would be insulting Islam by doing so – what he is doing is insulting America, the world and staying true to his Islamic roots, while enabling terrorists. 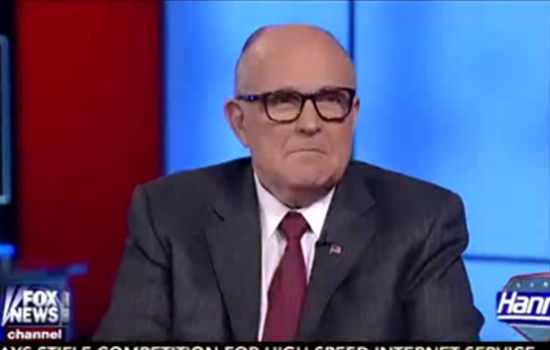 President Obama is not afraid to lob lofty accusations and slanderous rhetoric towards Americans with whom he disagrees. However, the Commander-in-Chief is terrified to address the rising issue of terrorism in the world and he outright refuses to cite radical Islam as the leading influence of terrorists threatening the American way of life today.

It is a unfortunate that the man who has remained so hostile to Christians in America and who has abandoned Israel on foreign policy has such abundant tolerance for those who swear it is their duty to God to kill Americans.

This fact is not lost upon former New York City Mayor Rudy Giuliani who has blasted the president for his complete unwillingness to address the dangers of radical Islam.

In a recent appearance on Fox News’ “Hannity,” Giuliani called-out Obama in some of the most-blunt terms ever, citing his unwillingness to address radical Islam as “cowardice and weakness.”

GIULIANI: Sean, it is, I think, very serious. I think it’s very serious because it sends a signal of cowardice and weakness.

HANNITY: It is cowardly!

GIULIANI: I’m saying this from 40 years of experience of investigating and prosecuting Islamic terrorism going back to the Palestinian hijackings in the 1970s. So this is not just a —

HANNITY: And you went after the mob in a big way…

Giuliani is right; we cannot begin to win this war with radical Islam if our “leader” is not even willing to label this threat appropriately.

Condemning the actions of radical Islamists does nothing to tarnish the beliefs of those who are Muslim; still, the president’s unwavering commitment to coddling terrorists signifies a complete cowardice on his part.

If you can’t separate the good guys from the bad guys, you will lose… period. And if you are not willing to meet deadly force with the same, you will die. It’s warfare and conquest 101 and Obama fails at it time and time again. While Europe is embroiled in chaos fighting terrorists as if they were playing whack-a-mole, Obama is releasing the worst of the worst of terrorists from Gitmo, so they can return to the battlefield and wage Jihad once more. It’s very difficult to call out the enemy, when you are one. Just ask Barack Hussein Obama.