Have You Seen The Crazy Sunbather-Catches-Cobra Viral Video?

It’s a brilliant piece of showmanship[1], but it’s not the amazing, death-defying feat it purports to be. 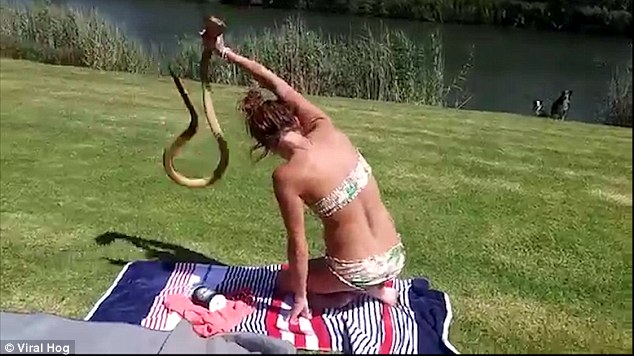 This is the amazing moment a woman sunbathing in South Africa catches a cobra before it can strike.

The girl, sitting by a lake in Robertson, Western Cape, wearing nothing but a bikini, is captured on video performing the amazing feat seconds after she had been chatting to a friend off-screen.

She uses lightning quick reflexes to grab the reptile by its throat as it launches through the air at her, while a pair of dogs watch on from the waterside, seemingly too terrified to intervene.

If you look closely you can see the shadow of the man reeling the snake in with a fishing pole. And of course, if you understand snakes you’ll know that they neither usually move that quickly nor do they move in a straight line, which is another giveaway.

In fact, what’s going on with the video is a prank a man was playing on his sister in an attempt to scare her, but she responds in a way he absolutely didn’t expect.