Even the animal kingdom has it’s own Trump and Putin… Now you decide which is which!

This is the instant a ostensibly motiveless horse tried to stomp out an alligator near Gainesville, Florida. Luckily someone with nothing better to do caught the footage and I’ll tell you what… It’s AWESOME!

The video also showed the reaction a small bunch of fearful onlookers, no doubt scared for the attacking horse… because let’s be honest… everyone chooses the horse over the dinosaur.

The people captured on camera were aghast to witness the attack[1], with one of them saying:

‘Did he bite him?’, while another one said ‘Just leave him alone!’

Still another asked, ‘Do you think he’s OK?’

Berry, another witness to the animal attack, had this to say about the whole ordeal:

‘I didn’t see any signs of distress for gator or the horse, but I did contact the reserve. They sent someone out, but I didn’t hear back.’ 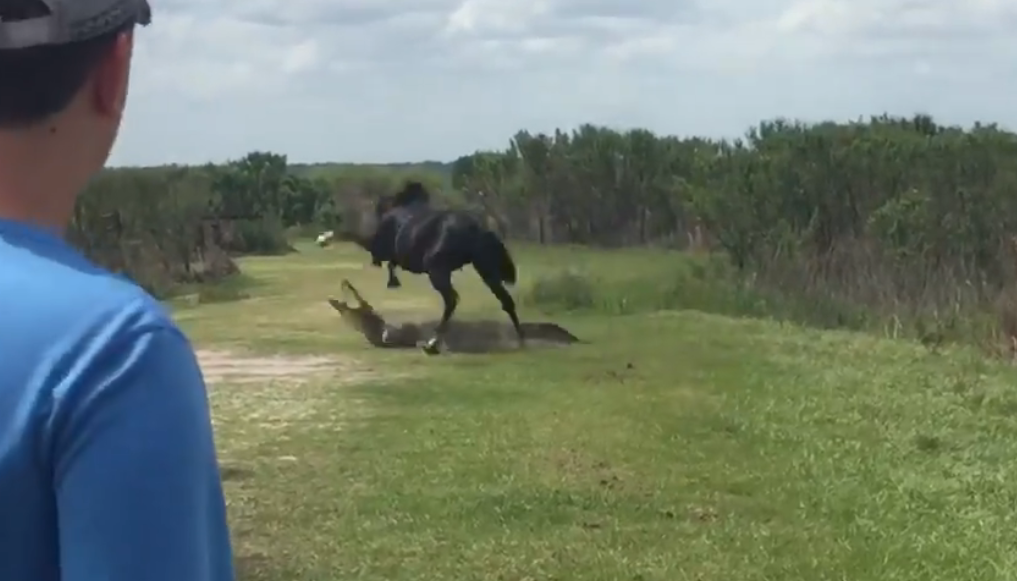 Berry and the rest of the group were heading to their vehicles from the La Chua Trail at Paynes Praire when they stumbled upon a little band of horses that were grazing in the area.

The next thing they noticed was the alligator that was also lying there…And then the horse closest to the group noticed the gator.

And it was on from there.

Next thing you see is the closest horse walking towards the gator and then all the sudden, WHACK! The horse starts stomping on the thing! It was far from a one-sided fight though, with the gator getting at least a bite in. You can see the horse limp a bit, probably wondering if it still has four legs…

The video has been floating around the Internet and racking up nearly 100,000 views since it was first posted. There’s just something about a good old fight between two UNLIKELY opponents!