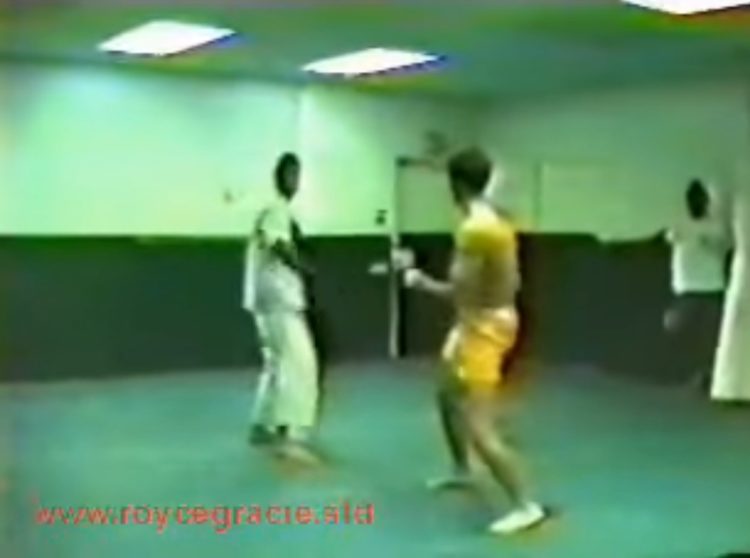 Royce grew up as part of the Gracie family that has developed modern Brazilian Jiu-Jitsu over the past century and his training began soon after he was born in Rio de Janeiro.

Royce began competing in tournaments at age eight. He received his blue belt at age 16 and was promoted to black belt in less than two years. Royce moved to the United States at age 18[2] to live with his brother, Rorion. They began teaching private classes out of their garage, sometimes for more than ten hours a day.  Together they opened the Gracie Jiu-Jitsu Academy 30 years ago in Torrance, California. Although Royce no longer teaches there because of his rigorous travel schedule, it remains one of the largest martial arts schools in the country.

In this video, we can see an underground fight between Royce Gracie, undefeated at the time against Jason DeLucia, a 15 year-old undefeated Kung Fu fighter. DeLucia is now retired, but after losing to Gracie he started practicing the Brazilian Jiu-Jitsu that destroyed him in this fight.

DeLucia practiced the Five Animals style of Kung Fu, Taekwondo, Aikido and, later in his MMA career, Gracie Jiu Jitsu[3] (mostly in his Pancrase fights). He is remembered by UFC enthusiasts for being among the first fighters to perform in early UFC tournaments. In UFC 2: No way out, DeLucia fought Royce Gracie and lost via armbar submission.

The guy in the yellow shorts is called Jason DeLucia, he started learning Gracie jiu-jitsu after this fight. DeLucia won the first ever UFC fight back in 1993 when he defeated Trent Jenkins with a rear naked choke. During the post-fight interview, he said that Gracie jiu-jitsu greatly influenced the way he fights. Jason DeLucia fought Royce Gracie again in 1994 during UFC 2, Royce defeated him with an armbar.