The moment a giant wasp goes head-to-head with a Tarantula…But which creature emerged as the winner? [Video]

Okay, this just creeps me out[1]. I have traveled a lot. When living in Arizona, I saw many Tarantulas… in fact, I have seen them migrate across roadways by the thousands. Think about that. I have also seen some uber creepy wasps. Idaho and California have tons of them and they like me for some reason. Oddly enough, I have never been stung by a bee or a wasp. But of all the things I fear on this planet, wasps and spiders are the two tops. In Oklahoma, they have a Cicada Wasp that is huge. And the Wolf spiders here are big enough to rope and ride. I kid you not. They actually chase you. I have seen Tarantula Hawks take down Tarantulas before and it is a sobering sight. They are among nature’s most frightening predators. 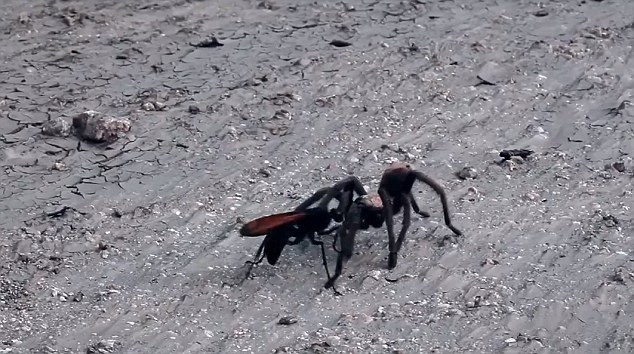 The two-inch Tarantula Hawk wasp preys on Tarantulas. This battle was filmed in Arizona, in the US.

The relative size difference should have meant it was no contest.

But amazingly, this wasp was able to get the better of its formidable opponent.

The battle between the two creatures was filmed in Arizona, in the US.

The footage shows a two-inch Tarantula Hawk wasp, which as their name suggests, preys on tarantulas.

A female Tarantula Hawk can seek out its prey by its smell and, after finding its burrow, will go inside and force the spider out.

The wasp will drag the tarantula back to its own burrow and lay an egg in its abdomen. Once the egg hatches, the larva inside is able to feast on the spider’s flesh.

Tarantula Hawk wasps are among the largest of the species.

Their legs have hooked claws for grappling with their victims and the sting of the female is considered the second most painful insect sting in the world.

These wasps are huge and right out of a nightmare, just like their spider victims are. I’m having a hard time having sympathy or empathy for either one. The wasp is a very efficient killing machine though and utterly fearless. Not only does the sting paralyze, think of the strength required for the wasp to drag the Tarantula that distance and then to stuff it down a hole in the ground, where it can lay its young in the spider’s abdomen, so they have something to feast on after birth. Reminds me of a Buffy, the Vampire Slayer episode. That one involved machetes and fire. Sounds good to me.