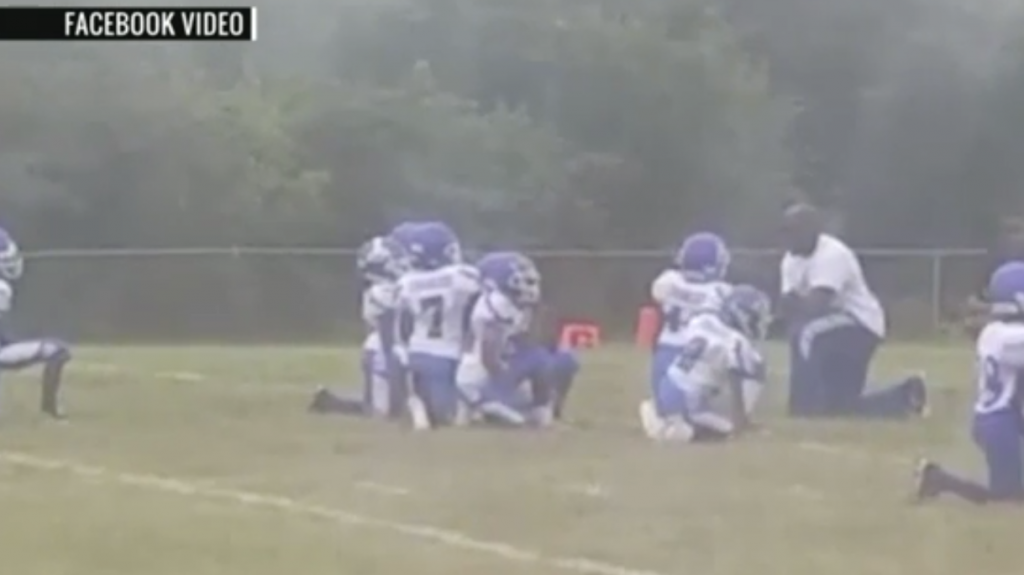 In Belleville, Illinois, the 8-and-under tackle football team are filmed all taking a knee during the National Anthem. And now we have the revealing phone interview with their coach, whose excuses for allowing the behavior seems a lot more like he encouraged the kids to be disrespectful instead of simply tolerated it.

Coach Orlando Gooden said that the team made a unanimous decision to take a knee with their backs to the flag when the Star Spangled Banner started to play at a game this Sunday in a suburb of St. Louis. When he spoke to a local Fox channel, Coach Gooden said that it was a direct response to the acquittal of the St. Louis police officer, Jason Stockley, who until recently was on trial for the fatal shooting of a black man, Anthony Lamar Smith.

The coach said he was asked by one of his charges about the protests and riots in St. Louis.[2] Coach Gooden said it was a “good teaching moment,” so he called the team into a circle and had a meeting to explain Colin Kaepernick’s protests of social injustice and accusations of police brutality. Then, Gooden said one of the kids asked him if they could all “do that.”

“What I teach my kids is love, integrity, honesty, fairness, respect and boundaries.”

He went on to say that as long as he has the support of the parents and team, he’s fine with the kneeling and that kneeling is covered under the First Amendment.

Kneeling is definitely covered under the First Amendment. And the rest of us are free to recognize what a colossal, disrespectful jerk you are to use these kids as a prop.

When the video was shared on Facebook on the league’s Facebook page and on Coach Gooden’s wife’s page, there was a mix of support and protest towards his actions.

“My child would not be on his knee!”

“I think you all have a good team good coaches and we respect y’all and what you are doing is right.”

“I’m so sick and tired of this garbage!”

“The coaches should be fired for allowing this!”

Despite the problems online, the coach still insists that it was the kids’ idea to kneel, not his.

This tweet is from Nick Short, who works with Michelle Malkin.

Every player on the Club football team (8 and under) took a knee during the national anthem. Congrats @NFL[3] https://t.co/6HXbazqzCJ[4]

The comment section on the video meets the coach’s inflammatory push against American patriotism with their own inflammatory responses:

“This coach is a lying piece of s**t eight-year-olds don’t know nothing, but cartoons and playing in the parks. They don’t watch the news this guy used these kids as a platform for his dumb**s agenda.”

“Argh! These kids are the future 8-year prison sentences.”

“It was a good teaching moment? He lies. I would have walked on the field and grabbed my kid by his pants and drug him off. Then tell the coach how my kid will never play for his racist **s ever again.

There are a few more highly-discussed comments on the video that I won’t republish because there’s only so many words I can bleep out before the sentence is nothing but ***’s.