Just like in a horror movie, you are driving down a dark, deserted road in the middle of the night. All of a sudden, a mysterious hooded figure appears in front of you. Great for a scare in the safety of a movie theater, but it was a chilling reality[1] for one man and his wife: 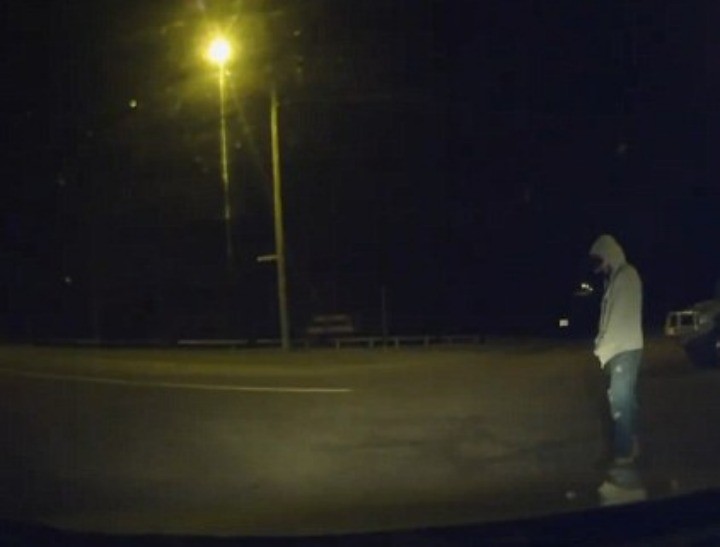 But for a man, and his wife following in the car behind, it was a terrifying reality at 1.30am on Sunday while driving along the pitch dark Lake Road near Kearsley, two hours north of Sydney.

The haunting footage, caught on the man’s dashboard camera, shows a four-wheel drive blocking the intersection when an eerie-looking hooded man steps forward and then stands side on to the car with his head down.

As the unsure motorist slows down, the man lunges forward and screams towards the car when the shocked driver immediately puts his foot down and speeds away.

As if the bizarre ordeal wasn’t terrifying enough, the rattled motorist tried to call his wife, who was driving about a minute behind him with her girlfriend, but he couldn’t make contact to warn her.

The unaware ladies were forced to encounter the same horrific experience.

The man’s wife, who wished to remain anonymous, said they were still shaken up by the frightening episode and wanted to know the motive behind the unusual incident

‘I almost stopped before I could go around this guy, and as we went past he just lunged at our door,’ the woman, who spoke on condition of anonymity, told the Newcastle Herald.

Police canvassed the area and found a man sleeping inside a silver Mitsubishi Triton on Hebburn Road, Elrington.
The man was charged with drug possession after officers found a small amount of crystal methylamphetamine, otherwise known as ice, while searching the car.

The man, believed to be aged in his early 30s, was taken to Cessnock Police Station and charged before being refused bail to appear before Maitland Local Court on Monday June 1.

I’m glad this creepy creeper is locked up. I mean really, who does this? I would be having nightmares for weeks honestly if this happened to me. **Shudder**