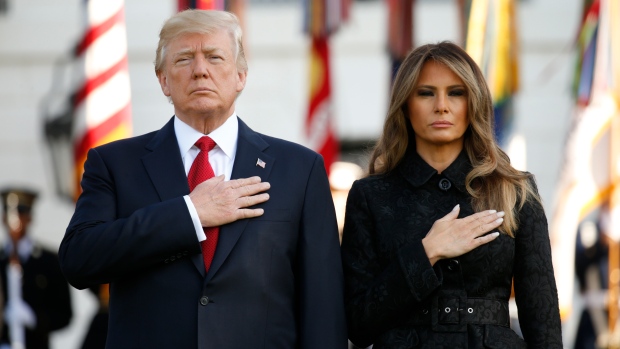 Donald Trump and his wife Melania Trump presided this morning over the 16th anniversary of the September 11th attack at the National 9/11 Pentagon Memorial.

On the morning of September 11th, eleven Islamic terrorists led by Mohammed Atta hijacked multiple planes which crashed into the Pentagon, the World Trade Center in New York City and one into a field after passengers fought back against their hijackers, who intended to crash into the White House.

Secretary of Defense James Mattis as well as the Chairman of the Joint Chiefs of Staff General Joseph Dunford will join the ceremony dedicated to the lives of the 184 people killed in the attack on the Pentagon. Vice President Mike Pence was at the 9/11 ceremony in Shanksville, Pennsylvania at the crash site of Flight 93 for the memorial for the victims who died on board.

The moment of silence this morning took place at exactly 9:37 a.m., which is the time that American Airlines Flight 77 with 64 passengers crashed into the Pentagon.

On Patriot Day, we honor the nearly 3,000 innocent lives taken from us on September 11, 2001, and all of those who so nobly aided their fellow citizens in America’s time of need. We rededicate ourselves to the ideals that define our country and unite us as one, as we commemorate all the heroes who lost their lives saving others.

September 11, 2001, will forever be one of the most tragic days in American history. Through the unimaginable despair, however, ordinary Americans etched into our history remarkable illustrations of bravery, of sacrifice for one another, and of dedication to our shared values. The shock from the indelible images of the smoke rising from the World Trade Center and Pentagon gave way to countless inspiring videos of co-workers helping one another to safety; of heroes running into collapsing buildings to save the innocent people trapped within; and to the unforgettable story of the patriots who charged the cockpit of Flight 93 to save untold numbers of lives. These heroes moved us with their bravery. They make us proud to be Americans.

After Trump was inaugurated, we reported on a sports writer being fired from the New York Post because of a tweet he sent comparing the Inauguration to 9/11 and the attack on Pearl Harbor[2]. Bart Hubbuch later apologized, but only after his professional life started falling apart.

Here’s the video of the moment of silence led by Donald and Melania Trump this morning. I skipped ahead to the ten minute ceremony.