This is something straight out of a stereotype. But that’s OK, because it took place in Brazil, where nobody cares about American stereotypes and there is no such thing as political correctness (they can’t afford it down there). 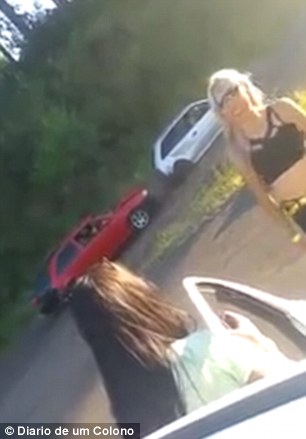 This is the moment a pretty blonde literally stops traffic after jumping out of her car to dance on the roadside.

A friend filmed her on a mobile phone as she leapt out of the vehicle in a pair of figure-hugging shorts and a cropped top which exposed her midriff.

A rubber-necking driver the other side of the road braked as she put her hands up in the air and jumped up and down to the sound of the music blaring from her car stereo.

The result was a three-vehicle pile-up as two cars behind smashed into him.

The brunette pal of the attention-seeker appeared mortified – and could be heard saying ‘Uh-oh’.

The pretty blonde can be seen turning to her with a look on her face that said: ‘Get me out of here.’

And, of course, the video – which has gone predictably viral…