A Florida veteran took matters into his own hands when he spoke to a ‘homeless’ man claiming to be a veteran. The man was panhandling and wearing an Army uniform outside MacDill Air Force Base. There was a detail that the drifter didn’t notice about his ‘uniform’- and the incredible exchange will blow your mind[1]: 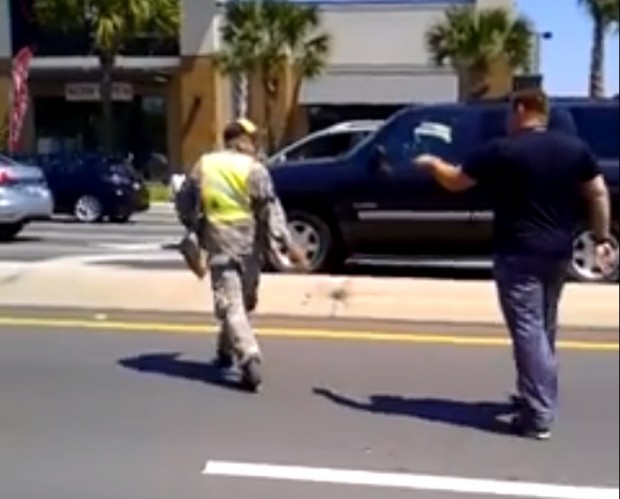 Being chased on foot by Goodwin, the man began taking the uniform off.

“Maybe one of the reasons I was so into this yesterday is tomorrow I’m burying a good friend who is a Marine…I’m putting that man in the ground tomorrow,” Goodwin added. “And I think that seeing this guy in uniform and wearing the uniform that my brothers and sisters have died in, it was more than I was willing to stand and take.”

Goodwin told WTVT that the individual told him he was in the special forces, but his uniform had a Junior ROTC patch. When questioned, he said the man failed to provide an adequate answers and was unable to produce a military ID card.

Goodwin said he felt a moral obligation to call the man out, telling WTVT he couldn’t let the panhandler take money from passerby using a fake story.

“Not on my watch. Not yesterday. Not today. Not tomorrow,” he said

Using a fake story like that to garner sympathy is just sick and wrong. Our veterans earned the right to wear our uniform, and to soil it’s image for a few bucks? Just sad. I bet this guy won’t be running his little scam anymore.