The Most Incredible Video You’ve Ever Seen: Woman’s Dog Emerges From The Rubble After She Talks About Losing Him In Tornado

Rarely do I do a post that’s centered on a video, but this may be the single most incredible video that you’ve ever seen;[1] so it deserves the honor. 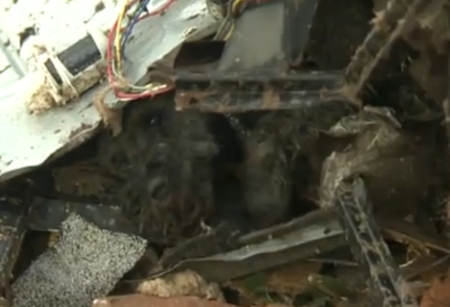 CBS News spoke with Barbara Garcia in the wake of the devastating tornado Monday, the woman’s suburban neighborhood now nothing more than flattened homes and rubble. Badly shaken but resilient, explains how she is okay but that her dog was torn from her.

“I was sitting on the stool holding by dog – this was the game plan all through the years, [to] go in that little bathroom,” Garcia began. “The electric went off in the bathroom about the same time I felt the stool come up out of the floor. And I rolled around a little bit, and when it stopped…that fresh stove cooker is what I saw.”

Garcia’s arms appear to be badly cut in multiple places, but she spoke first of her dog.

“I hollered for my little dog and he didn’t answer, didn’t come, so I know he’s in here somewhere,” she said, scanning the apocalyptic landscape.

Garcia then addressed the tornado itself, saying it came and was gone in a flash.

“I thought, ‘well, I’m okay!’ And I had some stuff on top of me and I started wiggling…” she said.

Interviewer Anna Werner interrupted: “Are you able to comprehend what happened here?”

“I know exactly what happened here!” Garcia responded. After a beat she added, “This is life in the big city.”

But that’s when the most incredible thing happened. One of the CBS crew says in astonishment, “the dog!”

…The camera then pans to an enormous pile of a rubble, the little dog whimpering and trying to burrow his way out.

Beginning to cry as she pulls her dog to safety, Garcia says “thank God” with inexplicable relief at seeing her dog relatively unscathed.

“Well I thought God just answered one prayer, to let me be okay, but he answered both of them,” she remarks with a smile, petting her dog. “Because this was my second prayer.”

If you watch one video in the next six months, this is the one to watch!