There are some seriously evil people in the world, but not all of them hurt fellow humans. It’s clear this dog[1] has never known an ounce of love in its life and doesn’t know what to do with itself when confronted by a compassionate hand. 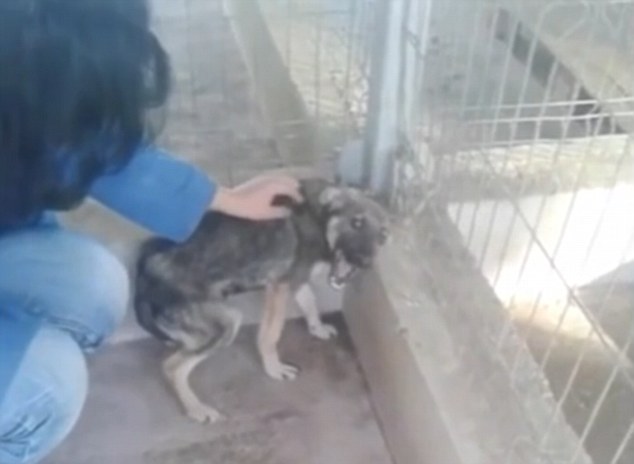 A video of a terrified dog crying as it gets stroked for the first time is sure to pluck at the heart-strings of even the most reluctant animal lover.

In a moving two-minute clip the once-abused pup issues heartbreaking cries as it gets given some rare but much needed affection, at a kennels in Romania.

At first the small whimpering dog, named Priscilla, seems genuinely in distress as she tries to comprehend whether her handler means her any harm.

Defenseless and petrified she often snaps her head around in an attempt to see what the hand touching her is going to do next.

Watching the puppy cower in the bleak corner of the kennel as she shrieks with fear gives the viewer an idea of the trauma she has previously suffered.

However, after a short period of reassuring and soothing strokes around her quivering head and under her chin Priscilla’s cries get quieter and quieter and she starts to relax.

Fortunately for viewers, we are gradually shown the positive progress Priscilla makes at the shelter, with consecutive scenes displaying her more at ease.

Later she cuddles up to a handler, plays in some leaves and interacts with another dog.

Not a lot is known about Priscilla but in a caption alongside the clip it says she was abused when she was young.

Despite a hard start to life it looks like she could be on her way to a happy ending.

This precious baby will hopefully learn what it’s like to be handled by someone who loves and cares about you.