Everyone loves adorable animal videos. And this video of a baby elephant splashing around in a pool for the first time is sure to steal your heart. 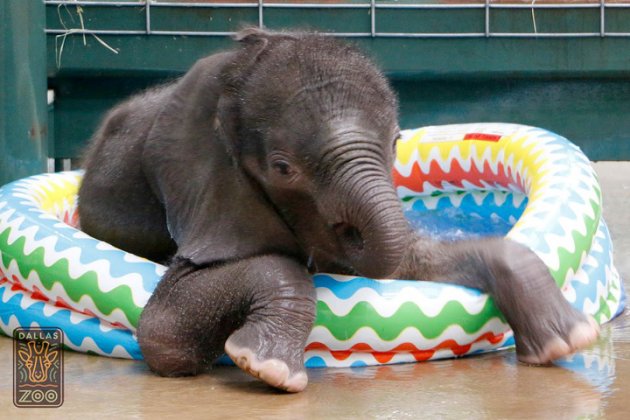 Ellie, an African elephant calf, was born on May 14 to mother Mlilo at the Dallas Zoo. Mlilo had been rescued from drought-stricken Swaziland during the spring.

Her baby only weighed 175 pounds at birth – not much for a species in which newborns usually go from 150 to 300 pounds.

But Ellie is clearly growing up to be a healthy elephant – and he will one day join other animals in the zoo’s exhibition.

The Dallas Zoo shared a video of Ellie splashing around in his kiddie pool on Facebook, prompting dozens of people to marvel at his cuteness.

Several of them asked if they could see Ellie yet, but zoo staff told them they would have to wait a little bit. The two-month-old hasn’t met visitors yet and is now in a private part of the zoo.

The video shows Ellie gleefully playing in the water, rolling inside the kiddie pool and stepping out clumsily.

He manages to get up despite the slippery floor and goes back inside, kicking the water with his legs while an employee sprays him with a hose.

A caption under the video promises that the pool will grow along with Ellie.

It will be a few months before the public will be able to see Ellie. But he’ll surely be a huge hit with the visitors!