Don’t peeve off Alice Keener when she is working for Jackson Hewitt in Walmart. That is the message we learn here in this crazy video of a fight that broke out in a LaPorte, Texas Walmart that was caught on video. 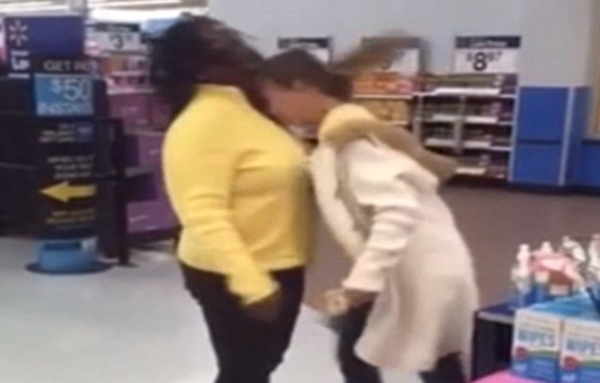 Jessica Albitz started the argument with tax preparer Alice Keener because she claimed that Keener was being “rude” to she and her husband when the couple were in for their taxes the day before. But as Albitz got more and more violent, the Jackson Hewitt tax preparer could take it no more.

An argument between two women descended into a violent brawl of hair pulling and punching after a customer headbutted a tax worker in Walmart.

Jessica Albitz claims Alice Keener, who works at a Jackson Hewitt stall within the store in La Porte, Texas, was rude to her and her husband the day before the fight broke out, when the couple came into the store to get their taxes prepared.

The next day, the two women got into another argument when Albitz returned to the store and that’s when things turned violent.

Video footage of the brawl shows Keener react by slamming Albitz’s head onto a table five times before dragging her to the floor by her hair as the two women continued to attack each other and shout.

They were eventually pulled apart by another customer.

Neither woman was charged, but Jackson Hewitt put Kenner on leave while they decide what to do about the fight.