VIDEO: Elderly Lady Has Doctor Remove ‘Mother of All Blackheads’ From Beside Her Eye

“Dr. Pimple Popper”[1] routinely films herself performing surgeries and then posts them on YouTube. In one video, we see her removing a years-old blackhead from beside the eye of a sassy elderly lady. 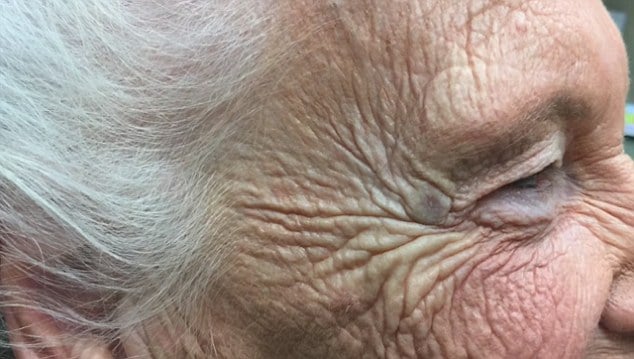 This is the disgusting moment an elderly woman had the ‘mother of all blackheads’ squeezed from her eye.

Dr Sandra Lee, who is also known as Dr Pimple Popper and based in California, had been treating the pensioner for skin cancer when her daughter pointed out the mark on her face.

Within a few minutes she makes a small incision on the surface and eases out a ‘disc-shaped blackhead’, which had unknowingly been sitting under the woman’s skin for years.

The patient, who had a cancerous lump removed from her left ear the previous week, was in high spirits as the spot burst, adding that she’s ‘going to look good for the party this weekend’.

When the pus is fully out, the woman takes a look at it and asks if it’s a blackhead.

Dr Lee replies: ‘It’s the mother of all blackheads. Mother had a mother,’ and adds that it will heal well as it’s only a ‘superficial cut’.

Accompanying the video on her YouTube channel, where she documents several of her surgeries filmed and edited by herself, she describes her patient as ‘vibrant and sassy’.

The dermatologist at Skin Physicians & Surgeons in Upland said: ‘This woman is truly amazing, for her vibrant and sassy personality, and for this huge blackhead she was hiding from me.

‘Last week, I removed a skin cancer from the superior helix of her left ear. When a saw her the next week, I mentioned that I had this YouTube channel and it was full of videos of “pimple popping”.

‘Immediately, her daughter pointed out this big disc-shaped blackhead! I can’t believe it never caught my eye in the moments that I spent with her the week prior.’

A blackhead, or an open comedo, is a wide opening on the skin with a blackened mass of skin debris, bacteria and oil blocking it.

Dr Lee, who has more than 380,000 subscribers to her video channel, gained fame when she started sharing her clinics in short clips on Instagram.

She says the most popular types of popping are the extractions of blackheads and whiteheads, and she has now come to learn that there are two different varieties of video – ‘a soft pop and a hard pop’.

Speaking to Racked in a previous interview: ‘I find this little subculture fascinating. I pop these things, and yeah they kind of make me feel good, they’re satisfying, but it’s not like I seek them out.’

As for her extraction technique, Dr Lee told the website that it’s ‘not completely sterile’, but she uses clean gloves and a comedone extractor.

Although she warned that people shouldn’t pop their pimples because they can risk scarring, she admitted that she is guilty of squeezing her own zits at home.

You can watch the video below: [GRAPHIC CONTENT WARNING]

I can’t tell if that’s awesome or nasty. But it makes me want to get checked out by my dermatologist.