VIDEO: Fire Truck Arrives At Burning Mercedes But Then This Happens…

Dorothy, we aren’t in Kansas any more… This is in Norway[1] – to be exact, this happened in Notodden, Norway in 2012. A fire chief pointed out that the firefighters violated their first rule… secure the scene. They should have put chocks in front of the tires to make sure the Mercedes didn’t roll – which it did. As they go to put out the fire, the car rolls down the hill before they can stop it. Luckily it hits a guardrail. Even luckier… it didn’t go through the rail and onto a house and kill someone. 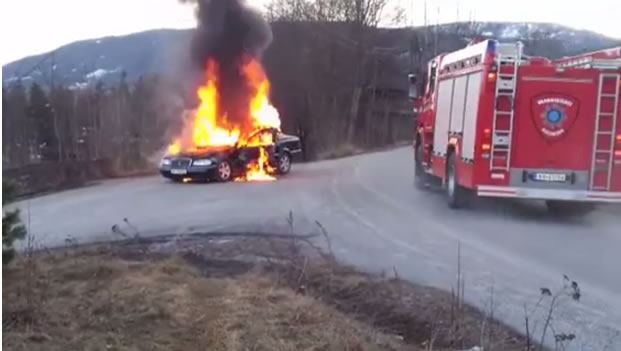 Fire truck arrives to put out the flames.

We’re sure this wasn’t supposed to happen.

It starts out well but Mercedes starts to roll and ends up a burning wreck against the barriers.

It would have been nice to know what caused the fire. Even if the brakes had been used, if the brake fluid burns… there would be no brakes. You would have to secure the car just to be sure. I also don’t know how they could be sure the car wouldn’t explode. People were close and hanging around. You would think they would have shooed them away from the area just in case. They eventually put it out. They were lucky… it could have been a lot worse.