VIDEO: Guy Boastfully Shows Off His Skills, Then Gets SHUT DOWN By Kid With Hockey Stick!

Russia: a man was showing off by standing on a hover board (it doesn’t really hover) and balancing an Ipad on his face while in in front of an escalator, but didn’t expect his thunder to be stolen by a little kid with a hockey stick. As a father was escalating with his kid upon his shoulders, the boy saw the showoff and whacked the Ipad off the man’s face with a hockey stick[1]. The result was an epic balance of humor and electro-tragedy as the Ipad smashed to the ground. Android fans enjoyed a moment of victory. Apple fans gasped in despair. No one cared about the clown on the hover board. 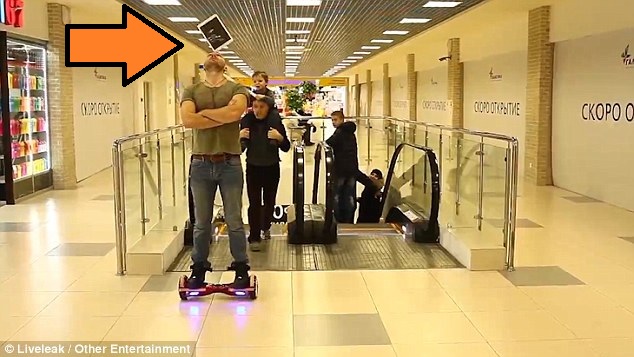 Shocking footage reveals the moment a young boy hits an iPad, which was being used in a balancing act, from a man’s face and to the ground.

I’d like to congratulate this father and son team for their heroic acts in combating social idiots and anyone who purchases the exploding hover boards. This father/son duo deserves an award!