VIDEO: Incredible Drone Footage Shows the Shocking Extent of Destruction Across Kathmandu After the City was Devastated by Huge Earthquake

The devastation that Nepal is suffering after being struck by a huge earthquake continues to grip the world. And a new video, taken by a drone pilot, shows in heartbreaking clarity how bad the destruction is. 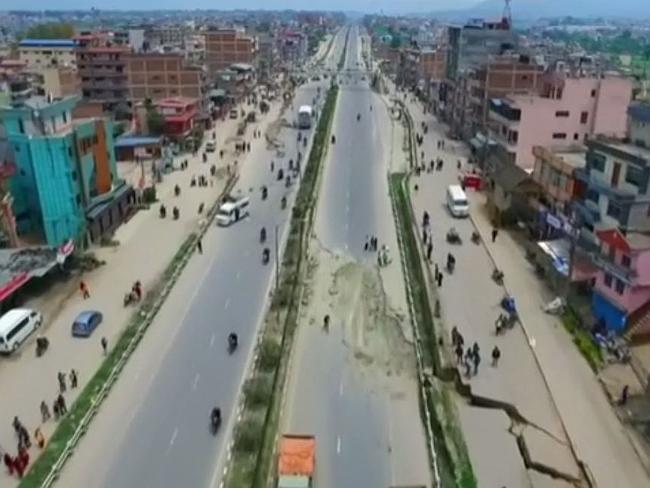 These incredible images reveal the extent of destruction wreaked across Kathmandu following Saturday’s earthquake, as it emerged that the city moved 10 feet in just 30 seconds during the devastating tremor.

Shocking images show a once lively Durbar Square, filled with locals, tourists and rickshaw drivers, now reduced to a mound of rubble, with desperate residents gathered in the open space amid fears their homes will collapse.

The iconic Dharahara Tower, previously a central focus of the Nepalese capital, is also now only visible as a barely-recognisable ruin, surrounded by scattered debris.

Meanwhile, aerial images taken from a drone across the city have revealed huge cracks in roads, fallen monuments and flattened houses after the Nepalese capital was rocked by a 7.8-magnitude tremor at the weekend.

The city remains short on shelter, fuel, food, medicine and power as its people searched for lost loved ones, sorted through rubble for their belongings and struggled to provide for their families.

It came as the death toll from the earthquake surpassed 4,352 this afternoon, with thousands of others still missing.

The earthquake also triggered an avalanche on Mount Everest, which means that the death toll will likely only rise, as officials start to work their way through remote mountain villages and towns. The earthquake was so powerful, that it’s believed that the city itself actually moved ten feet in just 30 seconds.