This looks to me like a typical case of Generation NOW’s entitlement. My kids try to act the same way – I will have a fit if I don’t get it now, and on and and on. The difference is, I check my kids when they act this way. I think this kid needed some strong parenting and sadly missed out. In addition to being fired, let’s hope that he has some serious criminal charges to face for basically destroying the front end of a McDonald’s.[1] 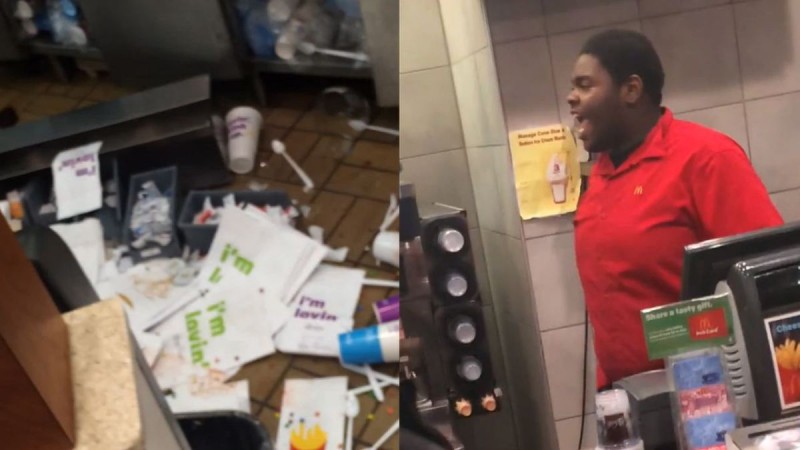 One McDonald’s employee in Minnesota must have had an Unhappy Meal before work.

The 17-year-old’s explosive “McMeltdown” was caught on camera and now he and his boss no longer have jobs.

Brandon Robertson, the former manager, was with the fast-food chain for five years before he was fired Monday.

The teenage employee ripped through the kitchen breaking coffee pots and turning over sauces.

Robertson said he refrained from physically restraining the employee because he is under 18. Instead, he asked other employees to call 911.

Now he’s out of a job because management didn’t like the way he handled the incident.

The owner of the McDonald’s later released a written statement apologizing to customers who witnessed the explosive behavior.

“While it is inappropriate to publicly discuss personnel matters, rest assured that we took the appropriate action to address the entire matter and not just what was seen on video.”

Management is still unsure what set off the teen.

What doesn’t make any sense to me here is why the person who was acting like an adult and didn’t put his hands on a minor – that’s still a crime in all 50 states, FYI – lost his job because of the way he ‘handled’ it. What was he supposed to do? He had other employees call 911 for him. He is seen trying to get the kid to leave. You can’t just put your hands on a child, or, you go to jail. Period. Enjoy the McTantrum below: