VIDEO: The Moment a Brave Buffalo Takes on THREE Hungry Lions to Rescue Young Calf After It is Snatched From the Herd

It doesn’t matter which species it is — don’t mess with a mother and her baby. Three lions learned this lesson the hard way, after they tried to snatch a young calf from a herd of buffalo… and the buffalo wasn’t having it. 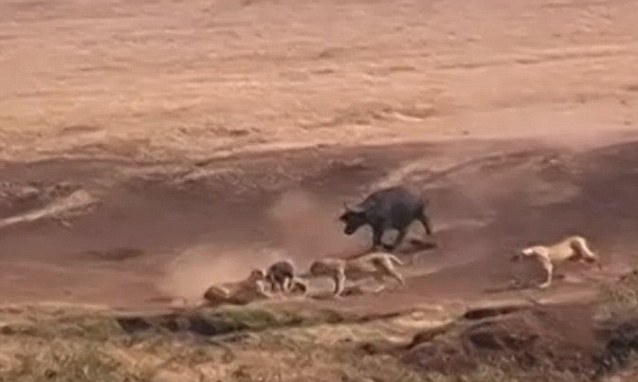 This is the moment a brave buffalo charged three lions after they grabbed a young calf from the herd.

The hungry lions crept up on the buffalo and calf in north-west Tanzania, East Africa, causing them to disperse in a terrifying 90-second ordeal.

While the majority of the buffalo escaped, one animal turned back and stood firm against the lions in a bid to protect its young.

But the big buffalo rallied and stood between her young and the lion’s teeth while charging horns-first at the circling predators.

Three lions took the opportunity to surround their prey and closed in on the calf.

But the outnumbered buffalo could not hold them at bay and a young lion pounced and snapped away the baby between its jaws.

Only the quick-thinking reactions of the the adult buffalo saved young calf from death.

The 1,000 pound beast ploughed into all three lions just as they looked set to feast on the calf.

And the rest of the herd arrived just in time to mount a dramatic rescue and send the lions retreating with their tales firmly between their legs.

Any mother would do anything to protect her young, and that can be seen among humans and animals alike. And while lions are vicious hunters, thankfully this video ended with a happy ending for the buffalo and her calf.