VIDEO: The Moment a Pregnant Woman Was Forced Out of Her Car and Onto the Ground at Gunpoint While In Labor, Because She Was Speeding to the Hospital

It’s like a scene out of a movie: a pregnant woman in labor while her frantic husband speeds to the hospital. For one couple, though, that led to a terrifying incident with police. 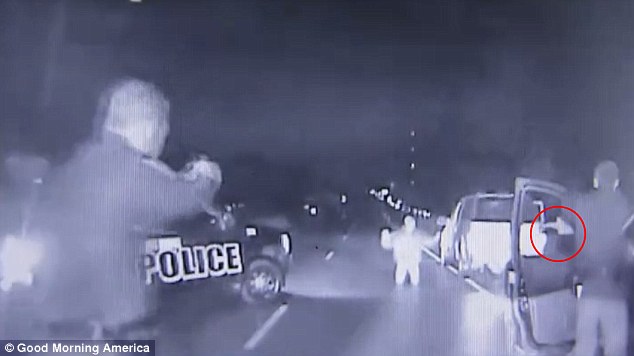 Rachel Kohnen and her husband Ben were going 30 miles over the speed limit on Tuesday morning in Fort Dodge, Iowa, as Rachel was in labor and felt that if the two did not get to the hospital soon she was going to give birth in a car.

Around that time, a police officer turned on his sirens to pull the couple over, but they kept going, ultimately being stopped when dispatched officers threw down tire spikes, blowing out the couple’s tires.

And now, in just released video from the dashboard camera of one of the officers, Rachel can be seen struggling to get down on the ground as multiple officers surround her with their guns drawn, this before being led off to the hospital in a squad car where she gave birth soon after.

… ‘[The cop] starts following me and he turns on his lights an my wife says we can’t pull over. The baby is coming now,’ Ben, who was driving, told NBC 13.

Said Rachel, ‘I did tell him not to stop.’

This story is obviously being engineered as another “evil police” article, but upon watching the video, it seems they didn’t do anything wrong. The police saw a speeding car, attempted to pull them over, only for the car to continue speeding… usually known as a high-speed chase. Once the car finally stopped, they did approach at gunpoint, but literally as soon as the woman screamed that she was having a baby, the officers lowered their weapons, put Kohnen into a squad car, and took her to the hospital. Seems reasonable enough to me. Apparently the Kohnens did notify 911 of their situation, so if anyone is to blame, it is the 911 dispatchers for not notifying police officers of what was going on.