You’ll occasionally see footage of brawls among legislators in places like South Korea or Uruguay, and they have an otherworldly feel to them. 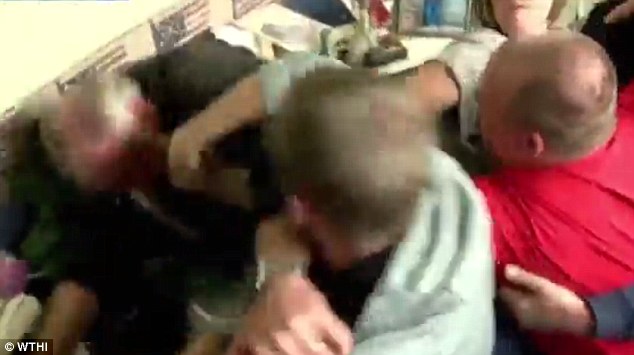 An Indiana town meeting was thrown into chaos when punches were thrown over the election of a new town marshal, and the firing of his beloved predecessor.

Residents from Hymera, a town of just 790 people, started brawling as the town board discussed the replacement of the law enforcement official.

Darrick Cullison, who was in the position, was set to be replaced by Daryl McCullough, a move that angered those who showed up.

Cullison claims he was wrongly fire from the position and has started legal action against officials – but the board still passed a motion to remove him.

A short time later, tempers flared and some in the audience stood up and showed their support for Cullison.

Members of the board asked him to ‘shut his crowd up’, but they ignored his plea.

Cullison ended up approaching McCullough and started hitting him. Others then piled in.

All hell broke loose from there. Here’s video…